There are 23 World Heritage Sites in the United States, three of which are in located New Mexico: Chaco Canyon, Taos Pueblo and The Carlsbad Caverns.

One must earn the right to claim having been to Chaco Canyon, as it is not your normal Sunday drive. It is located some 55 miles south east of Farmington in the Four Corners Area. After leaving the major highway
US 550 at Nageezi it is 25 miles of which 10 are paved, then 10 good miles of graveled road, and then welcome to the Navajo roads. This is a 4.5 mile rough old road with travel from creeping to all of 10 mph. I loved this drive, as it reminded me of years gone past.

In the early 1960's I was in the Service Dept of a major tractor distributorship, and the Navajo Nation had just begun to build their infrastructure of roads and schools. One of the first jobs I was on was at Kayenta, 120 miles from Farmington. We would spend the night in Farmington and leave early early in the morning for Kayenta. The first 30 miles were normal NM highways and paved, but when one came to the Reservation the Navajo dirt highway system began. It was normally a 10 hour drive, that is if the creeks didn't rise. Today it is 2 hours on a paved highway.

Shortly after leaving the Visitors Center, I glanced up as I thought I had seen an Elk. This was hard to believe. We backed up, and sure enough there he was lying near an arroyo. We found out, that there is a herd that headquarters in the park. Pretty smart Elk, as they know no one shoots here; except it be with a camera. 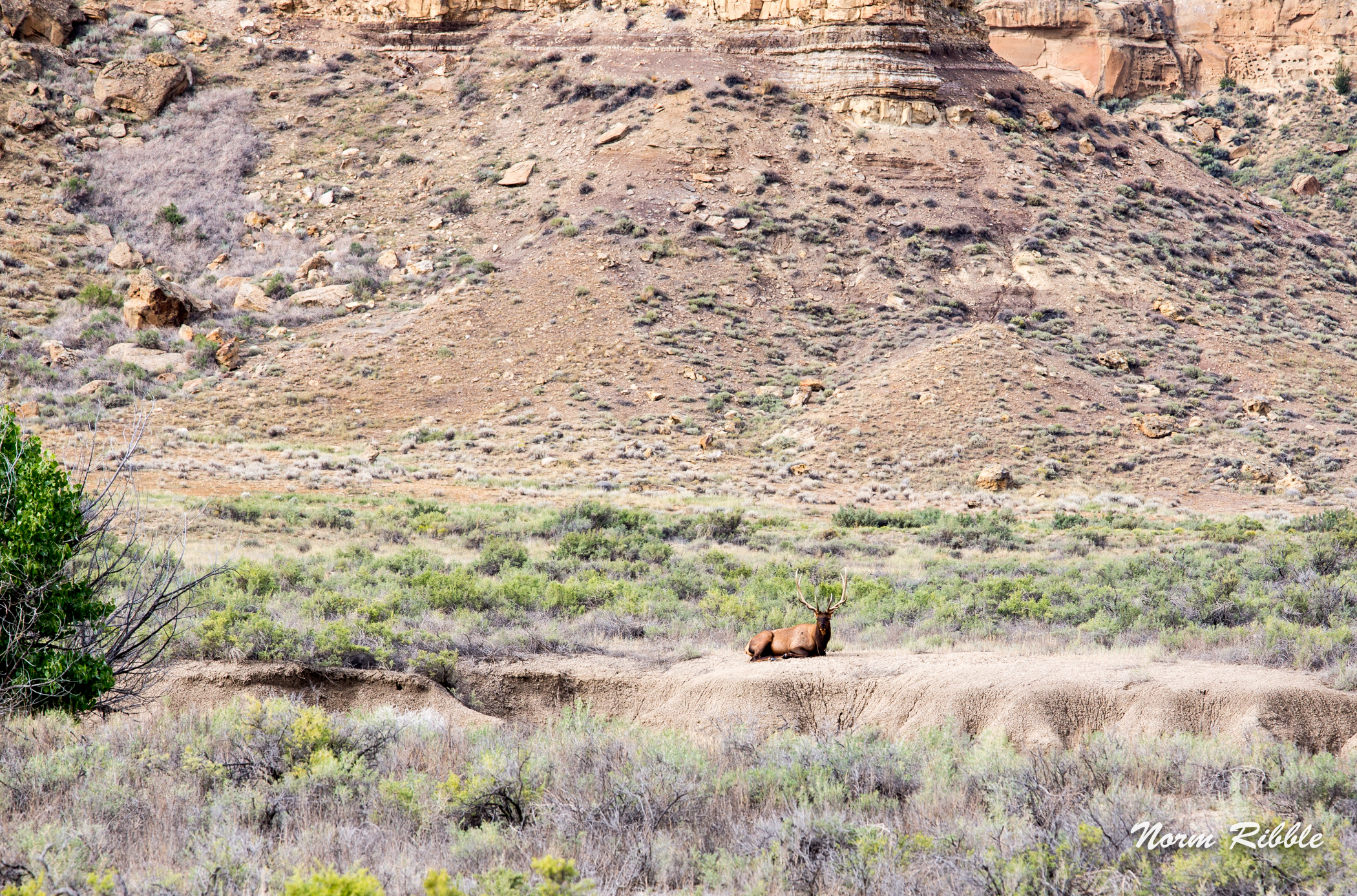 When you see this word (download) underlined and in blue that indicates it is a hyper link to the full scale picture. When you open it you'll also see that your mouse pointer is a round plus sign, click again and the part of the photo where your pointer was will enlarge again. This is great if you might want to see more detail in a particular view. When you want to return to this page just tap the return arrow. Try it you might like it.

Pretty fellow and he understands the heat also, with his tongue hanging out cooling off. How about his impressive rack! This is a politically correct phrase when referring to Elk, not girls, but OK for Elk. 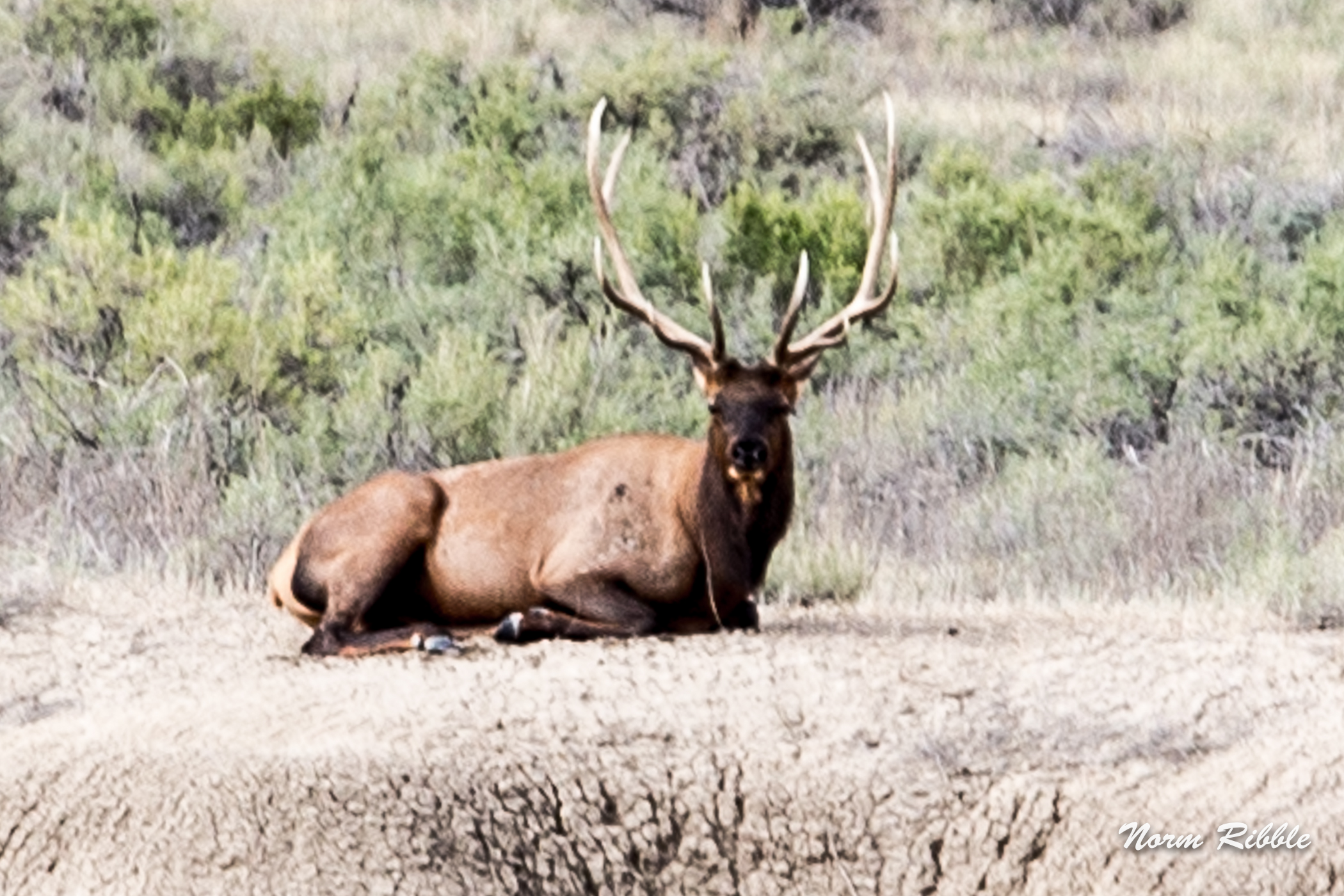 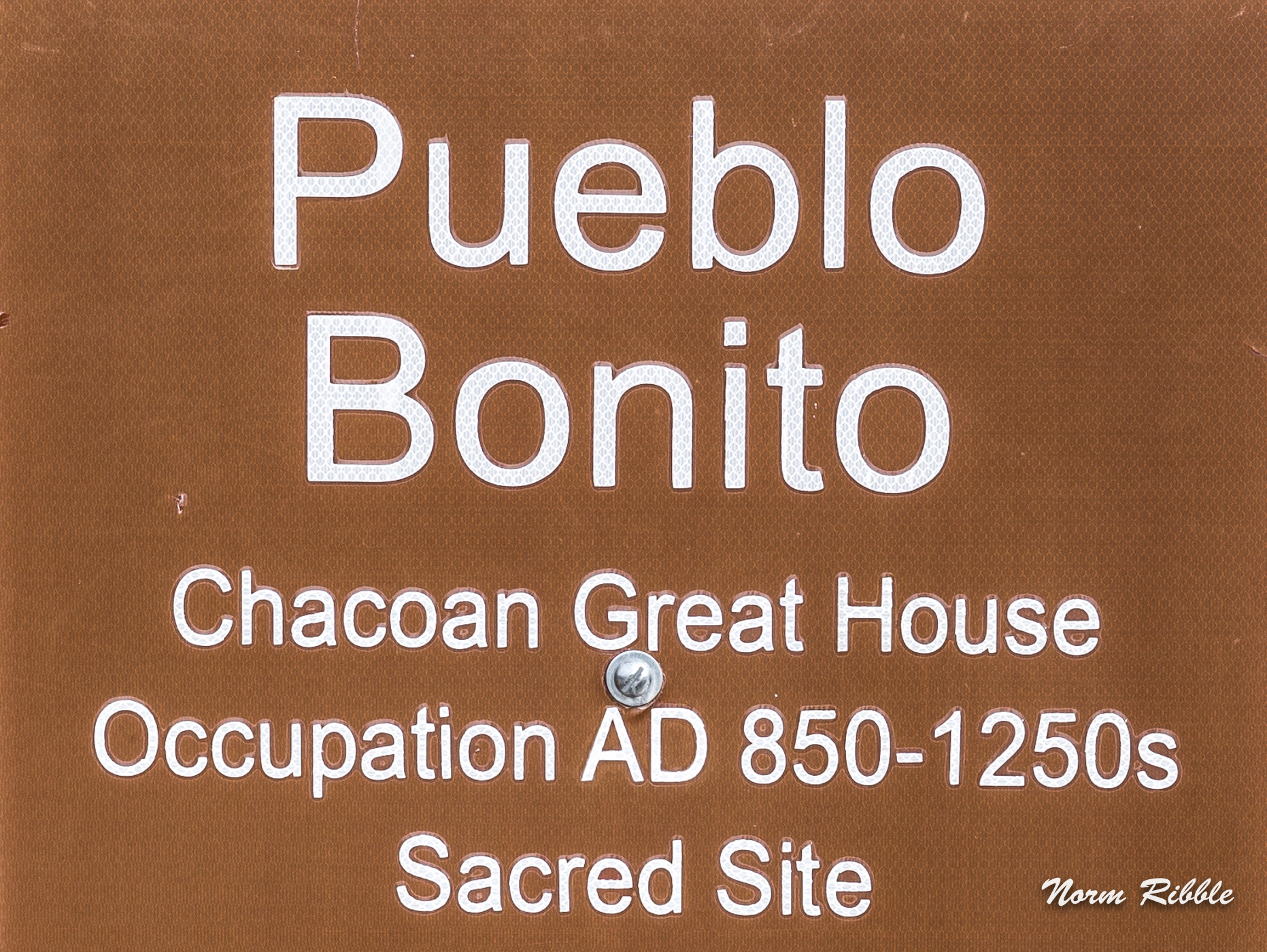 Snuggled just beneath the Rim Rock there are 5 ruins located relatively close together on the valley floor. Pueblo Bonita, (in Spanish Beautiful Town). It is considered to be the Center of the NC Ribble to Chaco Canyon NPWorld. Archaeologist estimate that 100 people lived in Pueblo Bonita year round, and that extra rooms were allowed for guests and traders. Chaco Canyon was the center of trade for thousands of miles and Pueblo Bonita was the religious or ceremonial center, and trade center. Chaco Canyon as a whole had a population of over 2,000 people. 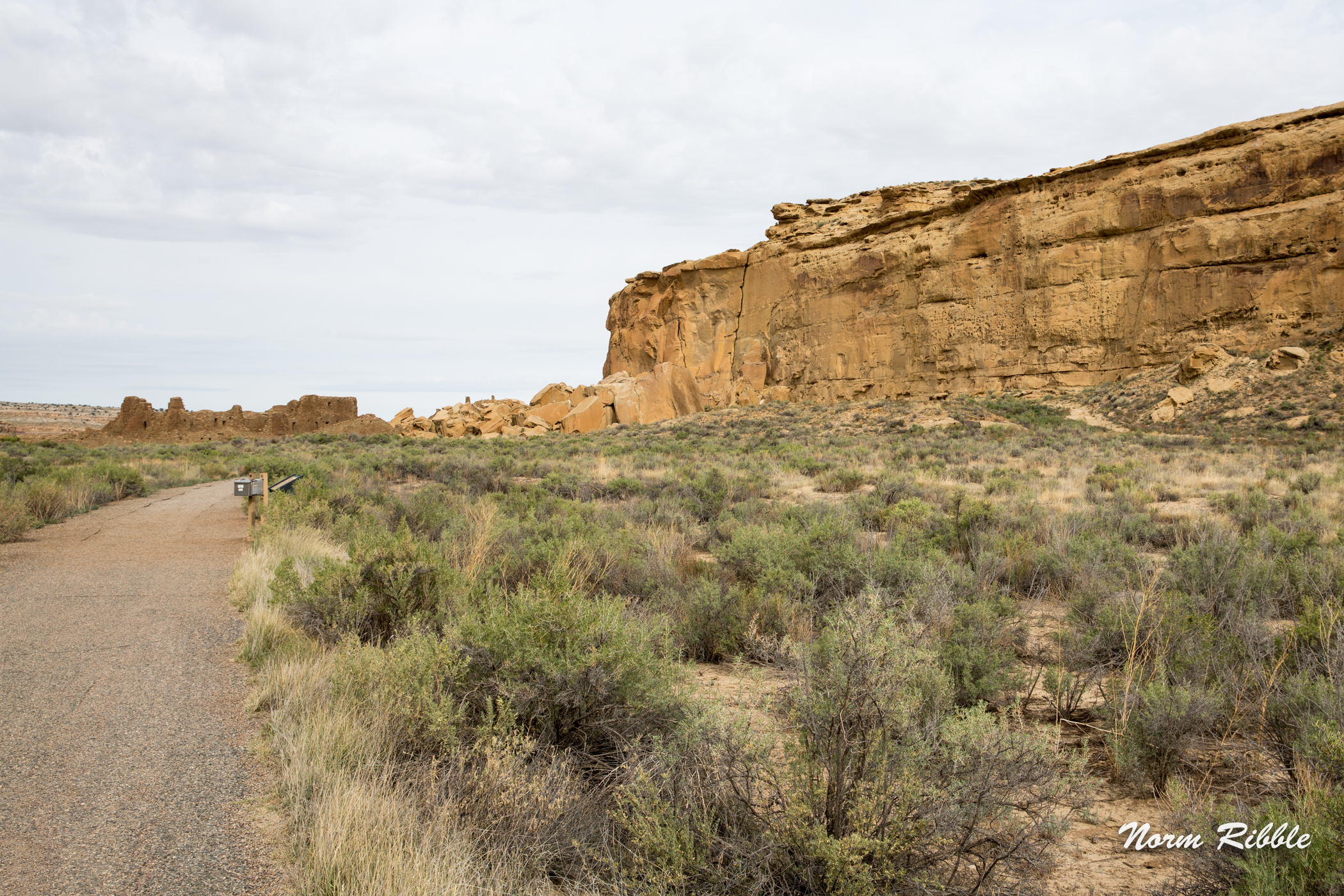 There was a young Park Service guide giving a lecture and tour of Pueblo Bonito, the largest of the Chaco complex. Why not! He loved this assignment. It was his first; and so different from the East Coast where he was raised. 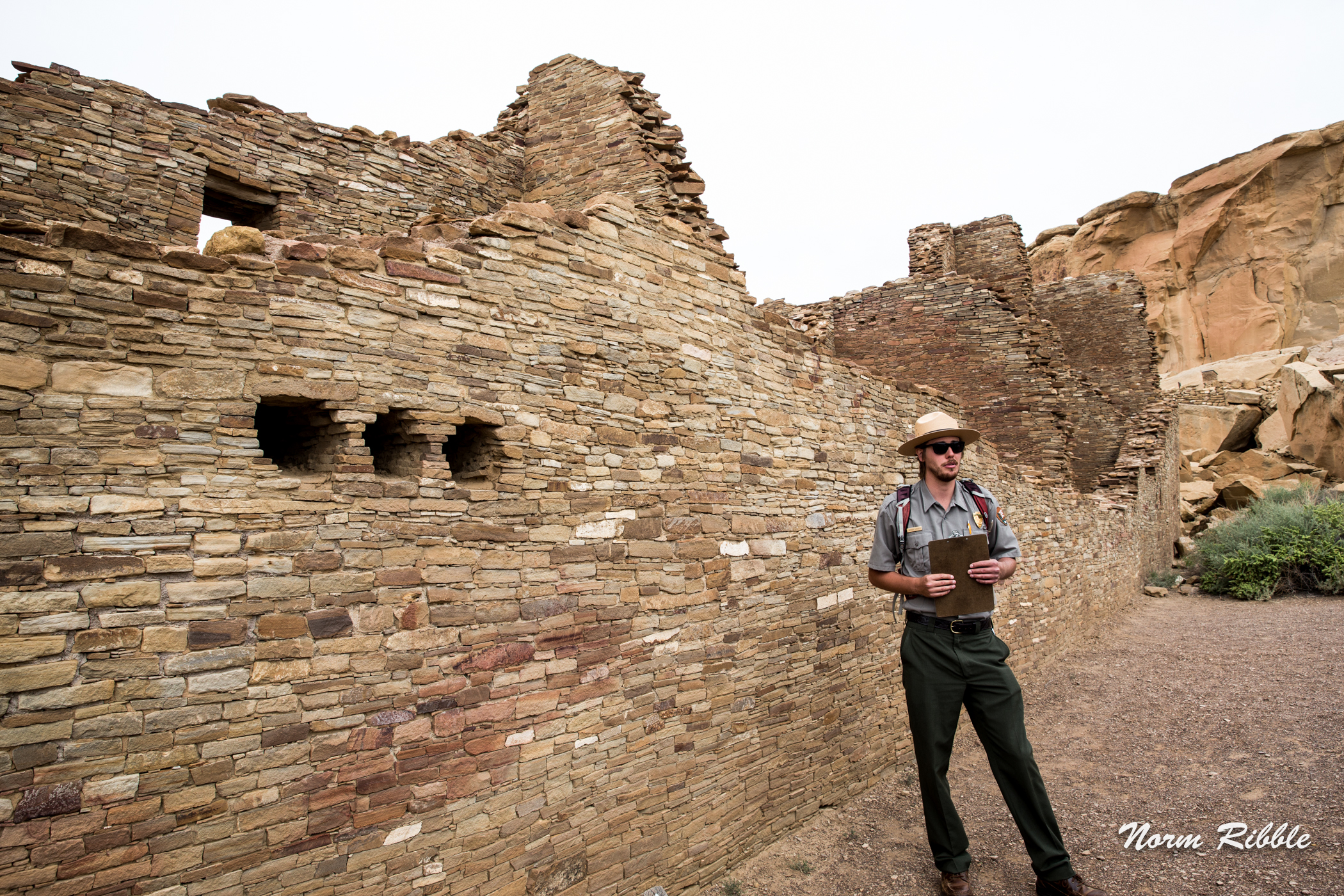 I would like to draw your attention to the masonry work over this entire structure. And recognize at the time the Chacoans lived here, these walls were plastered.

I've mentioned this masonry; as when we get to Mesa Verde in a couple of weeks, you'll notice a completely different pattern with the masonry not nearly as refined as we observed here at Chaco. Too, remember Chaco was built some 500 years prior to the cliff dwellings at Mesa Verde. These walls were constructed by craftsmen. 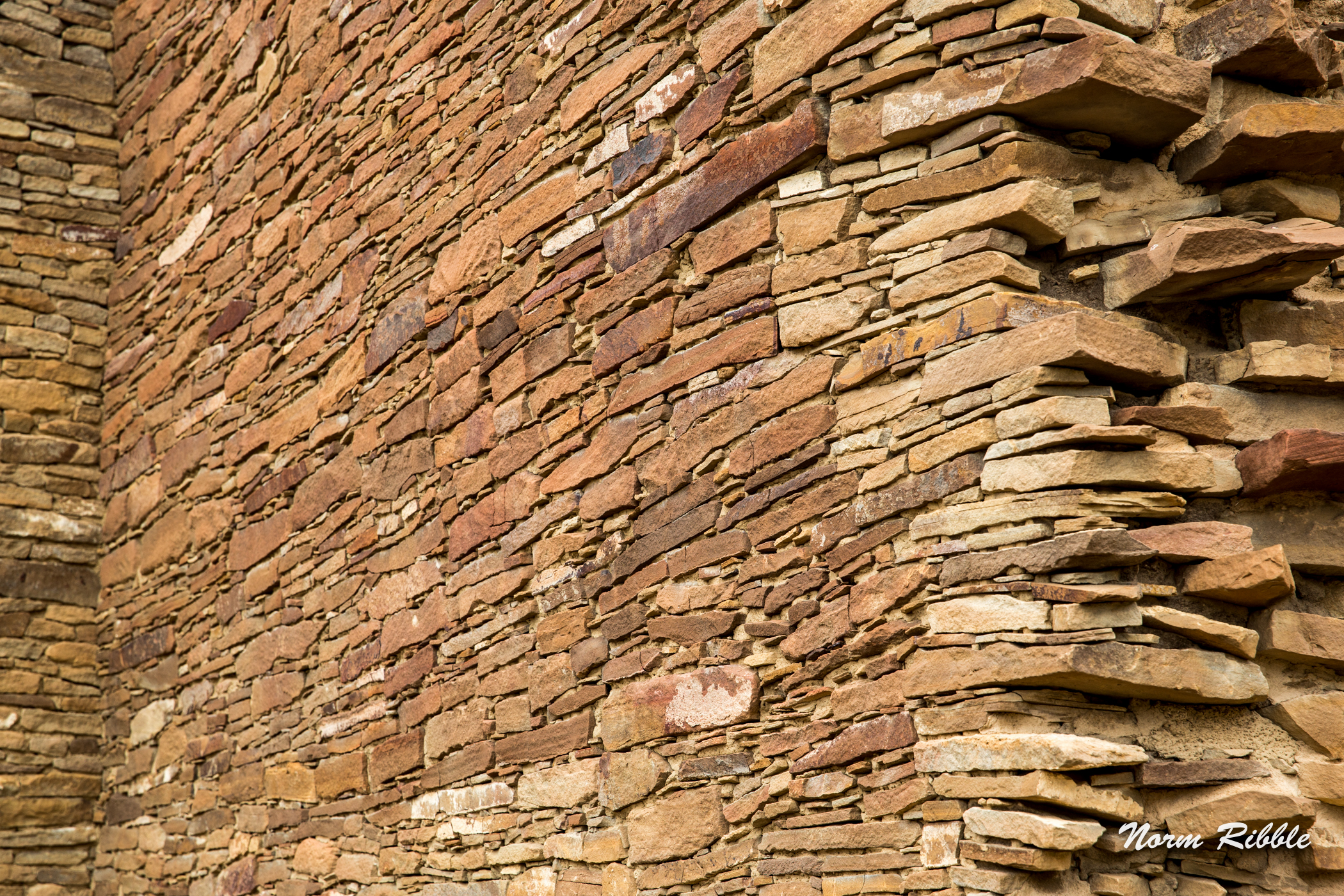 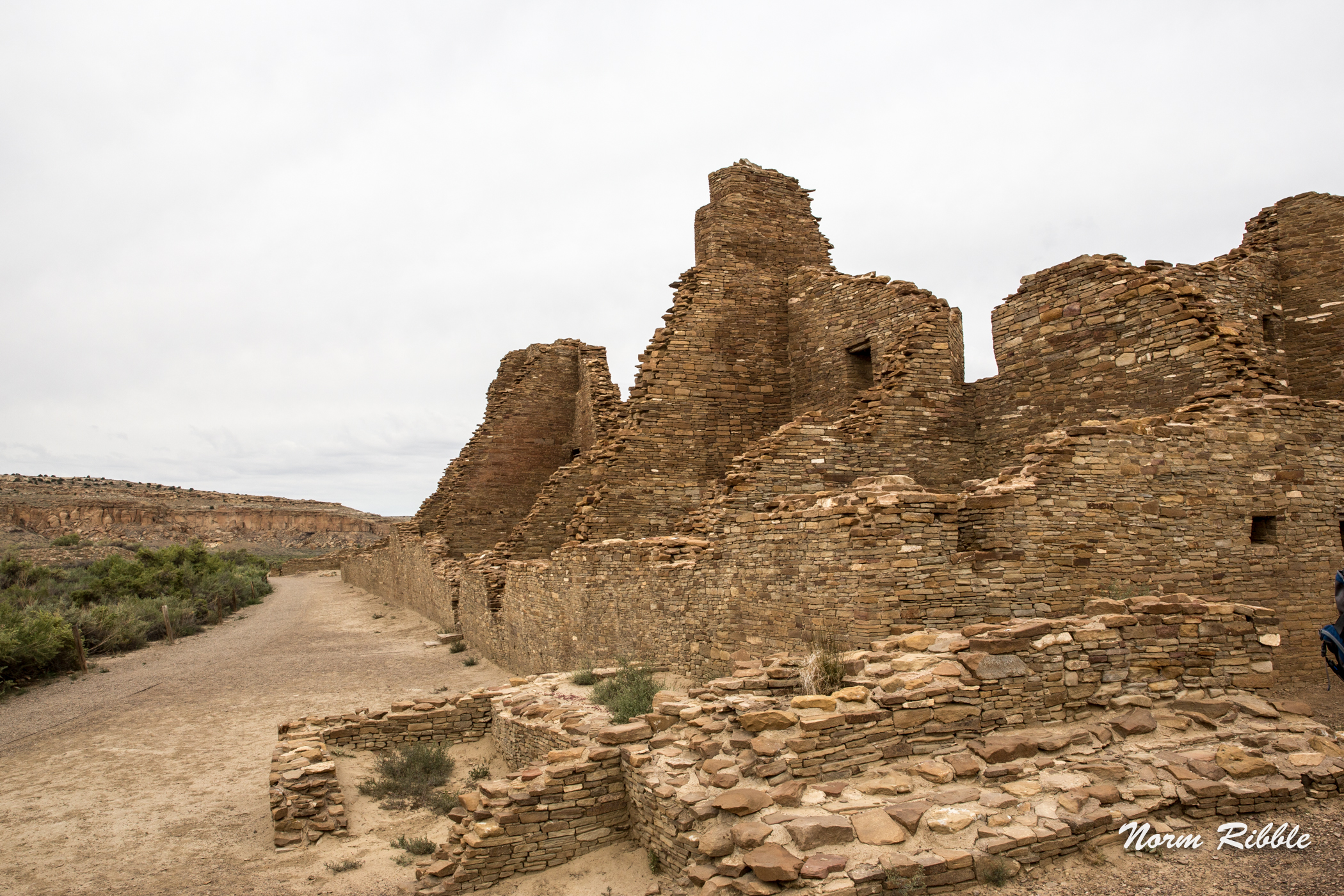 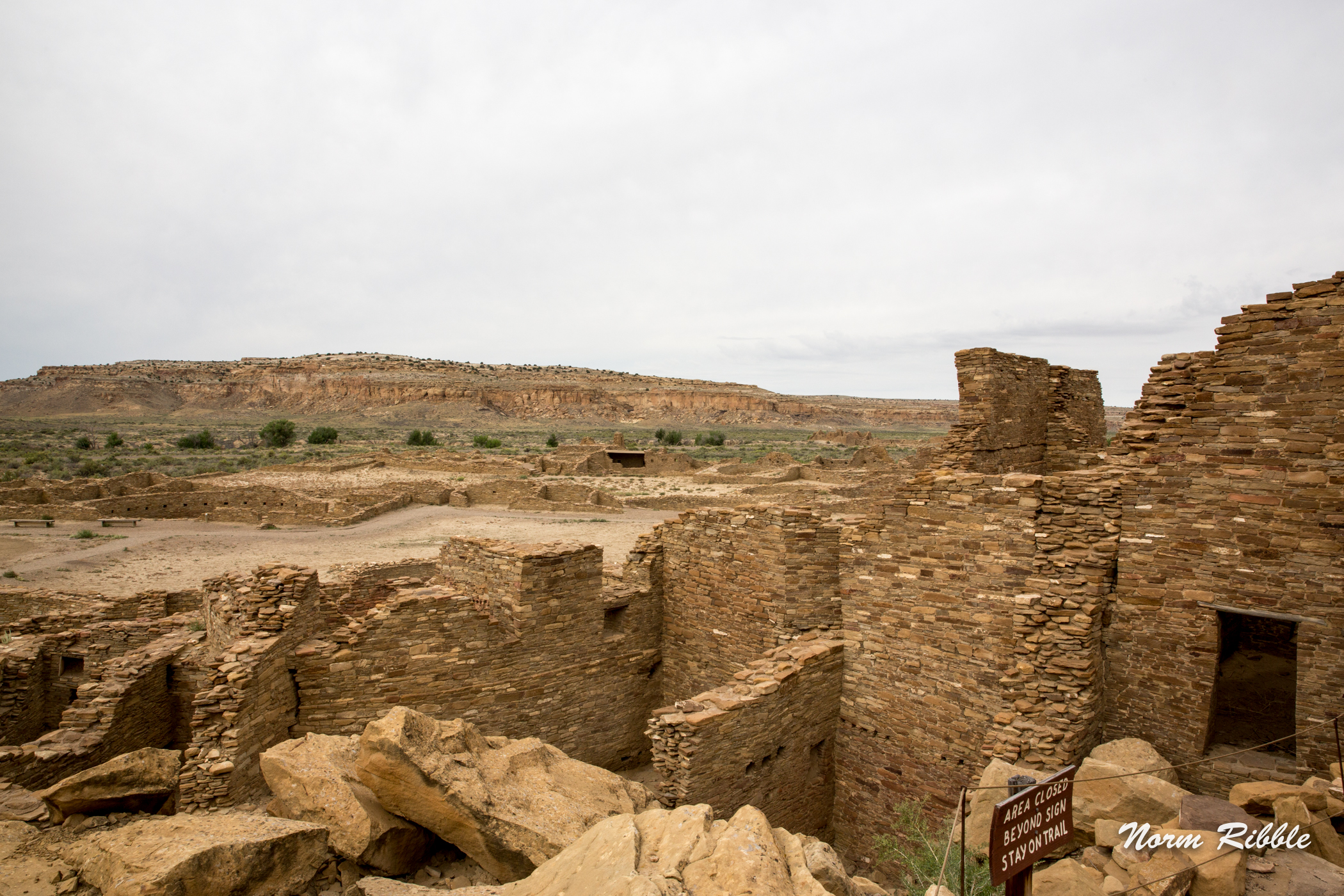 Our Guide and lecturer and the position of the Park Service is that other than seasonal rains in the arroyo bed there was no water in Chaco Canyon. They believe that any water for personal consumption and for building of these massive structures was carried into the site.

I don't believe that for one minute. 2000 people living in a place without a water source? Man does not build or reside where there is no water. Water is the blood of life, and no where is that more pronounced than in the high desert of the Southwest. Granted there is not a source of sustainable water present today, but 800 ~ 1300 years ago, my logic maintains there was livable water at Chaco Canyon.

I'll share an experience with you of some 40 years ago. Dottie and I were traveling across the Navajo - Hopi reservations, we passed a couple of nice motels just trying to get a little farther down the road. All of a sudden it was dark, and we were still driving. We came to Keams Canyon, and there found a small Navajo motel. It was just a small old room but very clean. Best of all is that we had a bed for the night. Then we discovered the water. It was the softest and purest water imaginable. Oh! so sweet. Why did they settle at Keams Canyon? Water my friend, Water. I believe that the Chacoans did the same at Chaco Canyon. 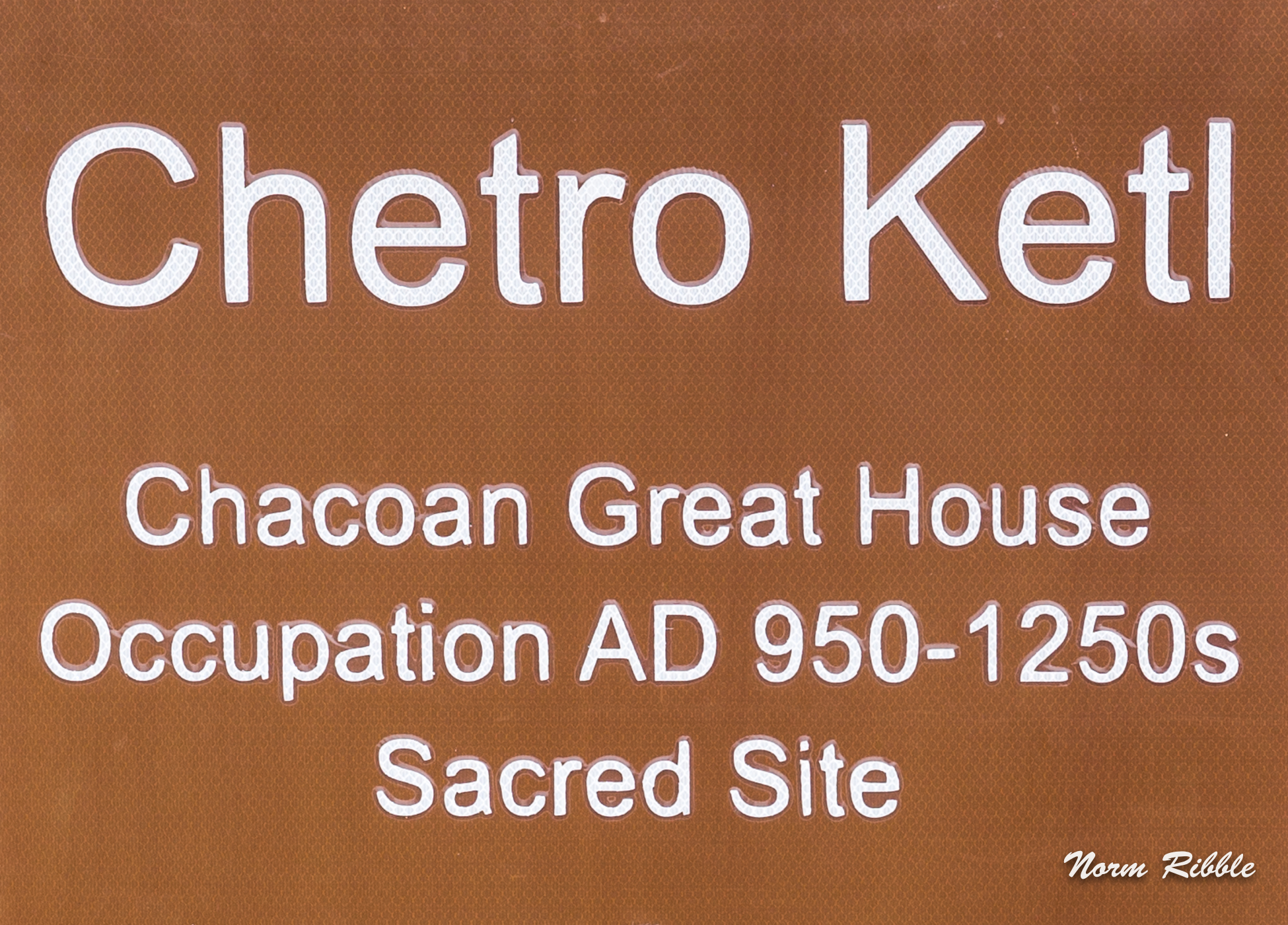 This is the second largest dwelling complex, and I want to draw your attention to the size of this Kiva. Later, I'll show the reconstructed Kiva at the Aztec Ruins National Monument in Aztec, NM which was also occupied by Chacoan Outliers. 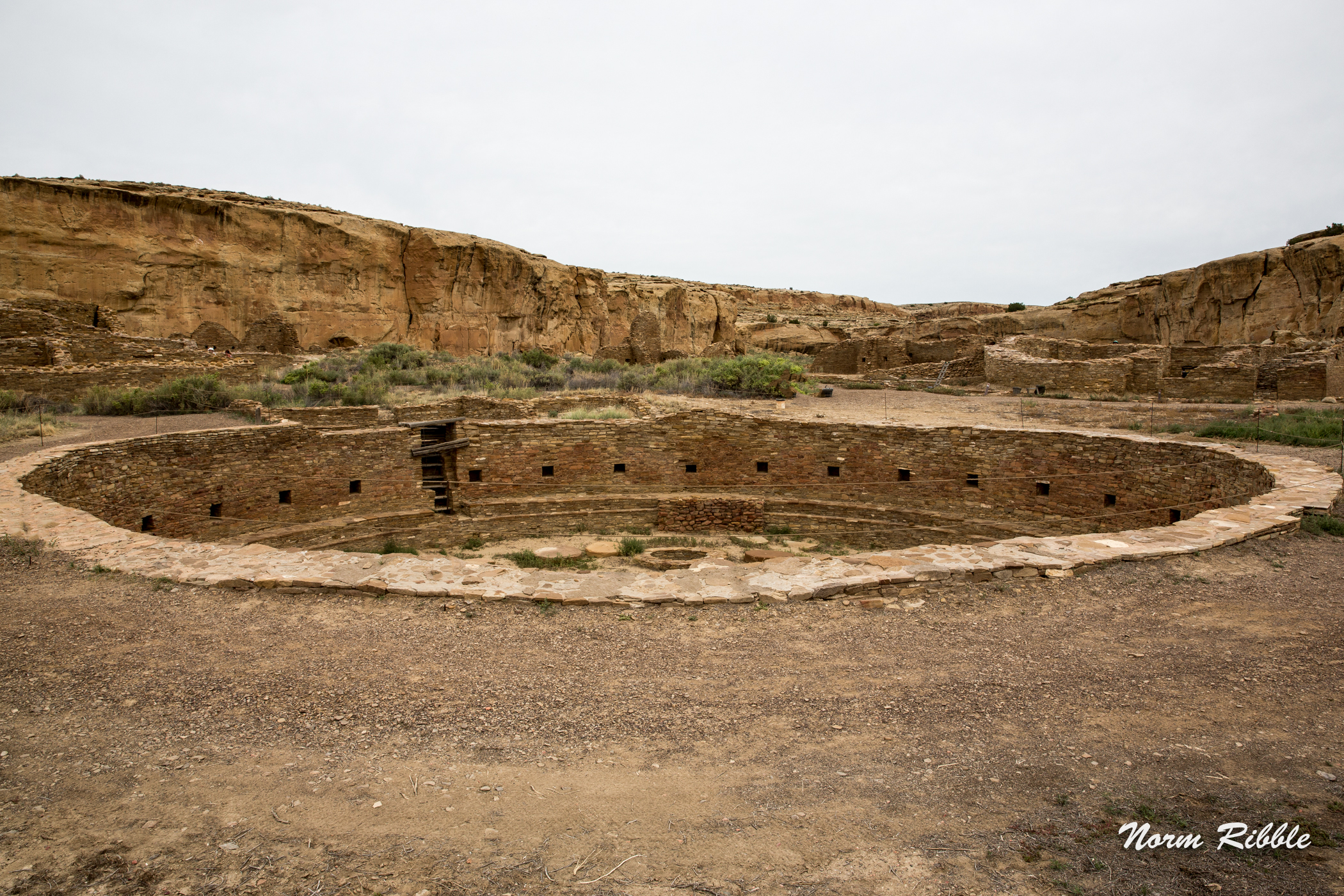 These excavated ruins stand the toil of times; but now once uncovered, they too there must be maintained as with any other structure. We found these Navajo craftsmen doing exactly that. 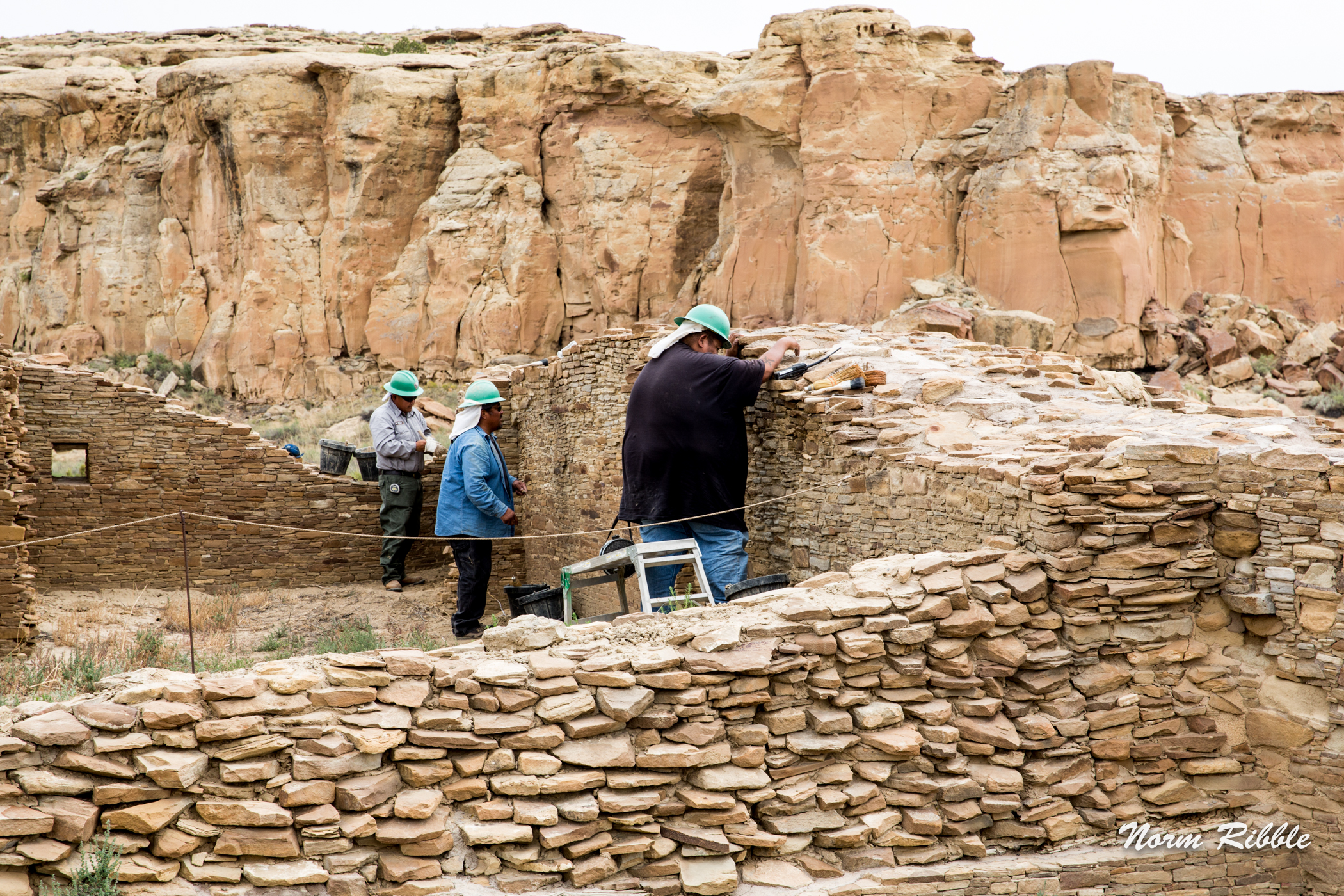 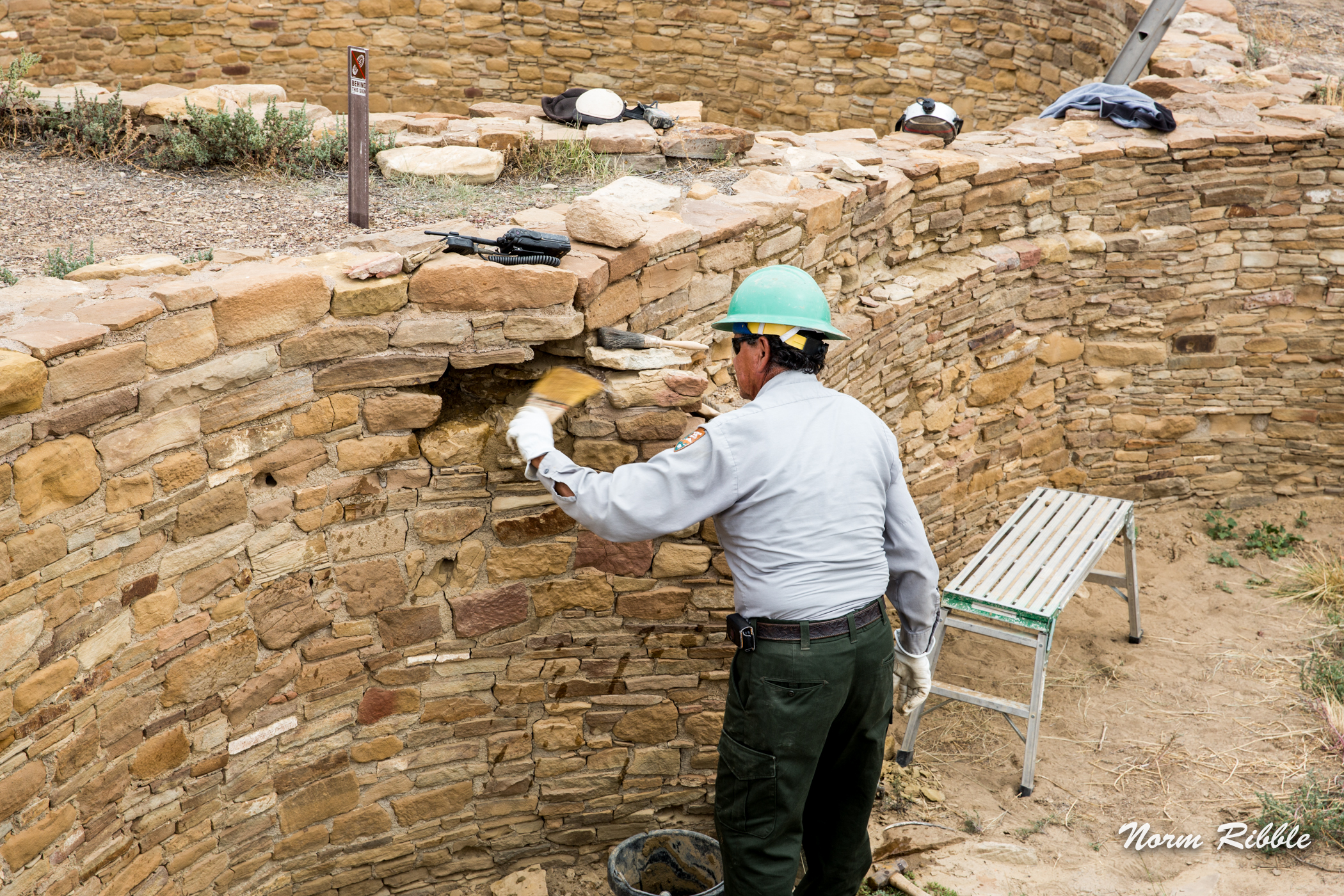 And because of them you and I and future generations will enjoy the wonders of these walls at Chaco Canyon. 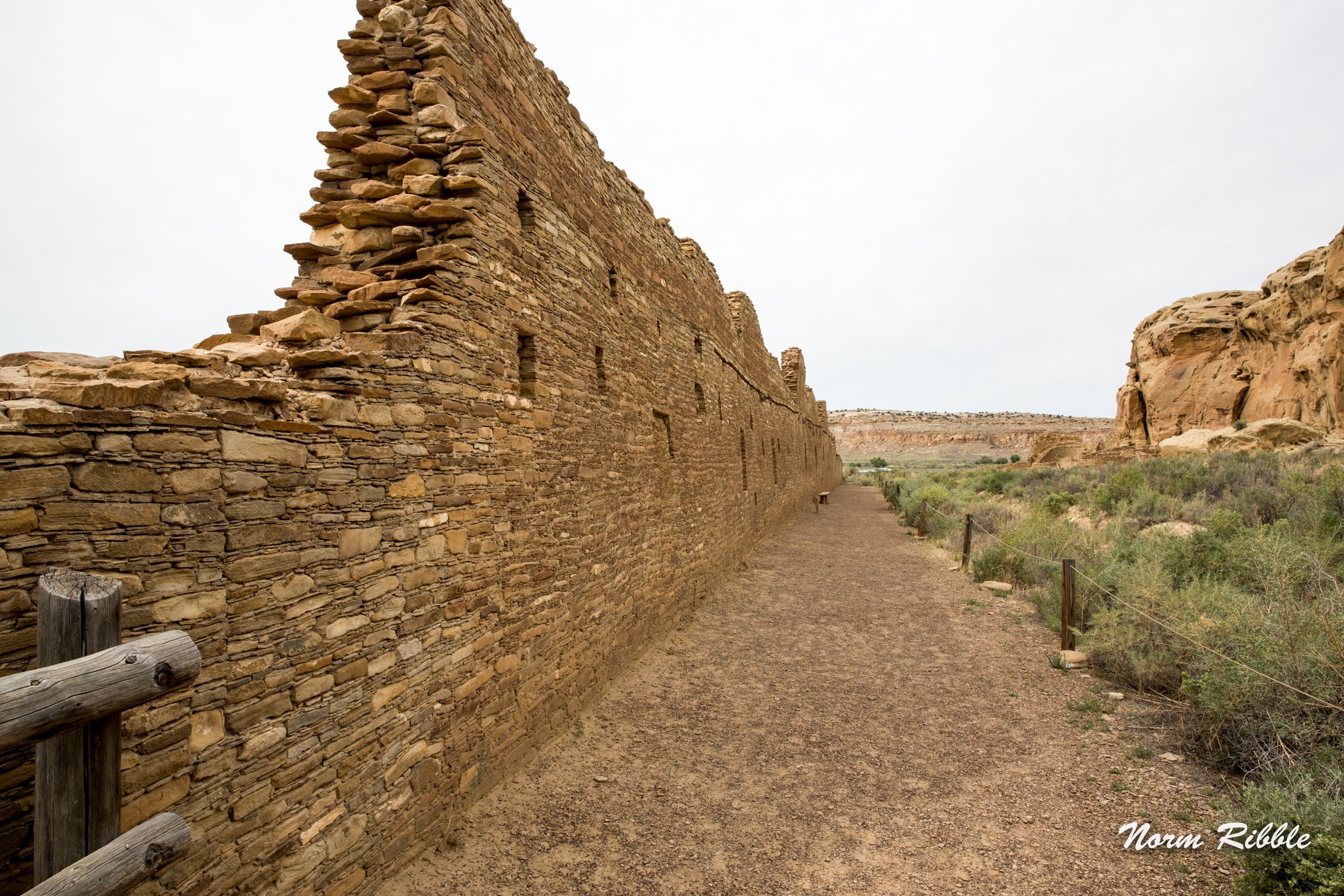 There are two significant other displays that complement the story and history of the Chocans. One must understand that scattered over the area were other settlements of Chocans; so lets explore the Salmon Ruins at Bloomfield, NM some 55 miles up the road toward Farmington and then the National Monument of the Aztec Ruins at Aztec, NM another 9 miles north. Both of these sites are easily accessible and off the Tourist route. 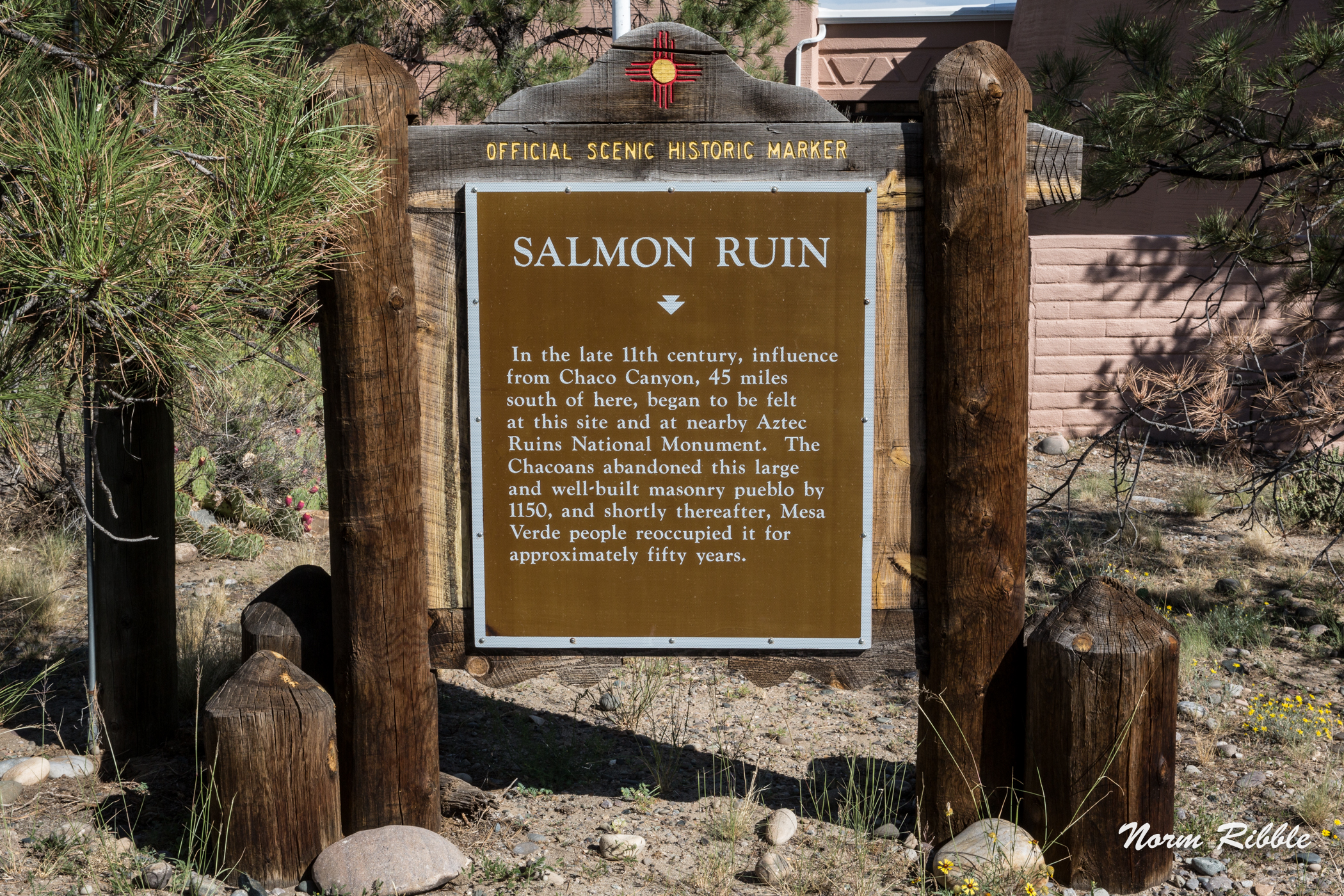 The Salmon homestead of 160 acres was filed in 1877 by Peter Salmon, a German Immigrant on the San Juan Valley. You are looking at the 1898 home of his son, George, with the corrals and the bunk house. To the upper left is the Salmon home and the root cellar. This is a very basic and well laid our homestead in a beautiful valley near the river.

This property was left to the San Juan County Museum Association in 1969 by Peter Salmon's grandson, Charles Dustin. This was almost a 100 years after the original homestead. So beside walking the grounds of the ancient ruins the Salmons kept and guarded for you, you are also seeing how our early western settlers of a hundred and twenty years ago lived and had their being. 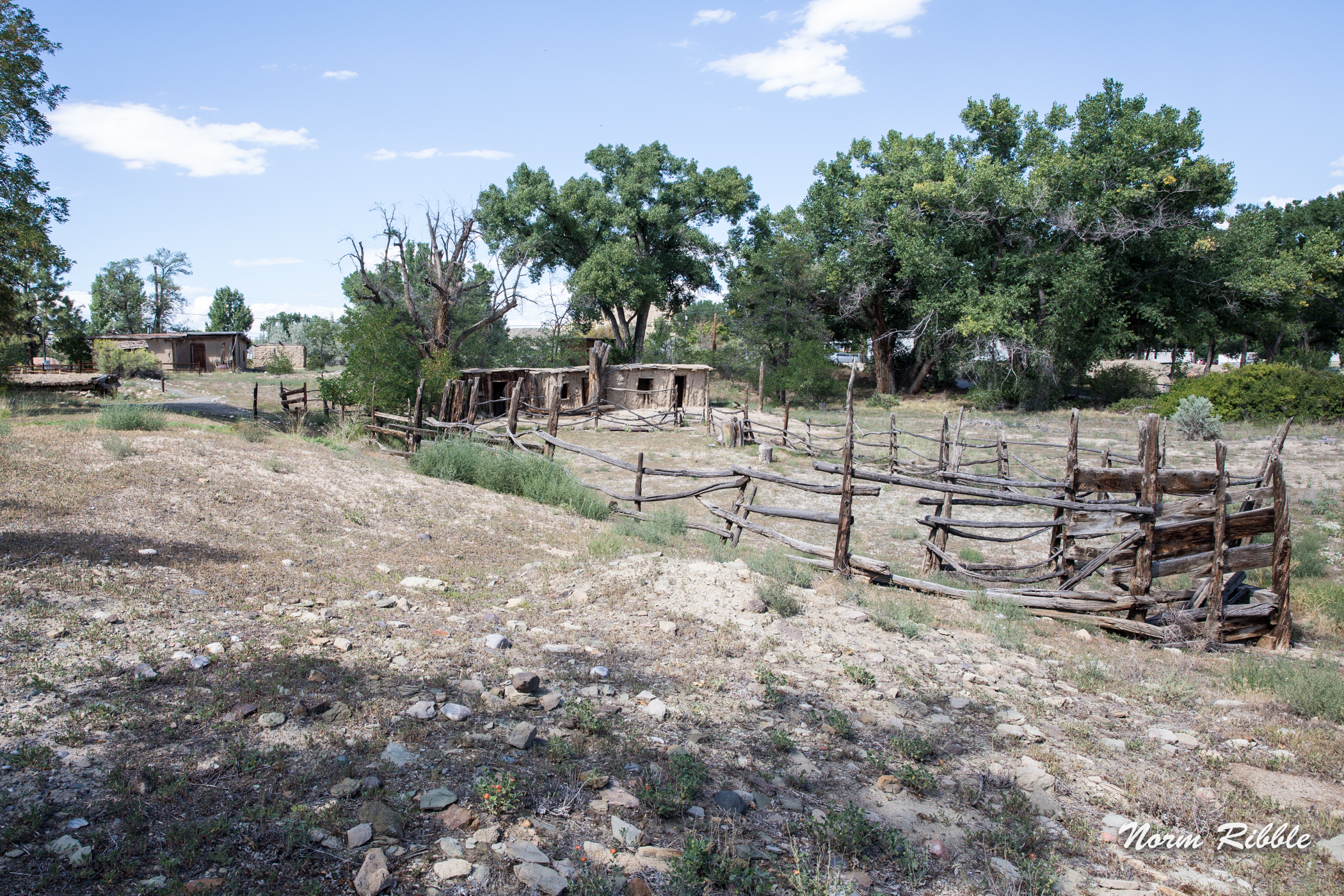 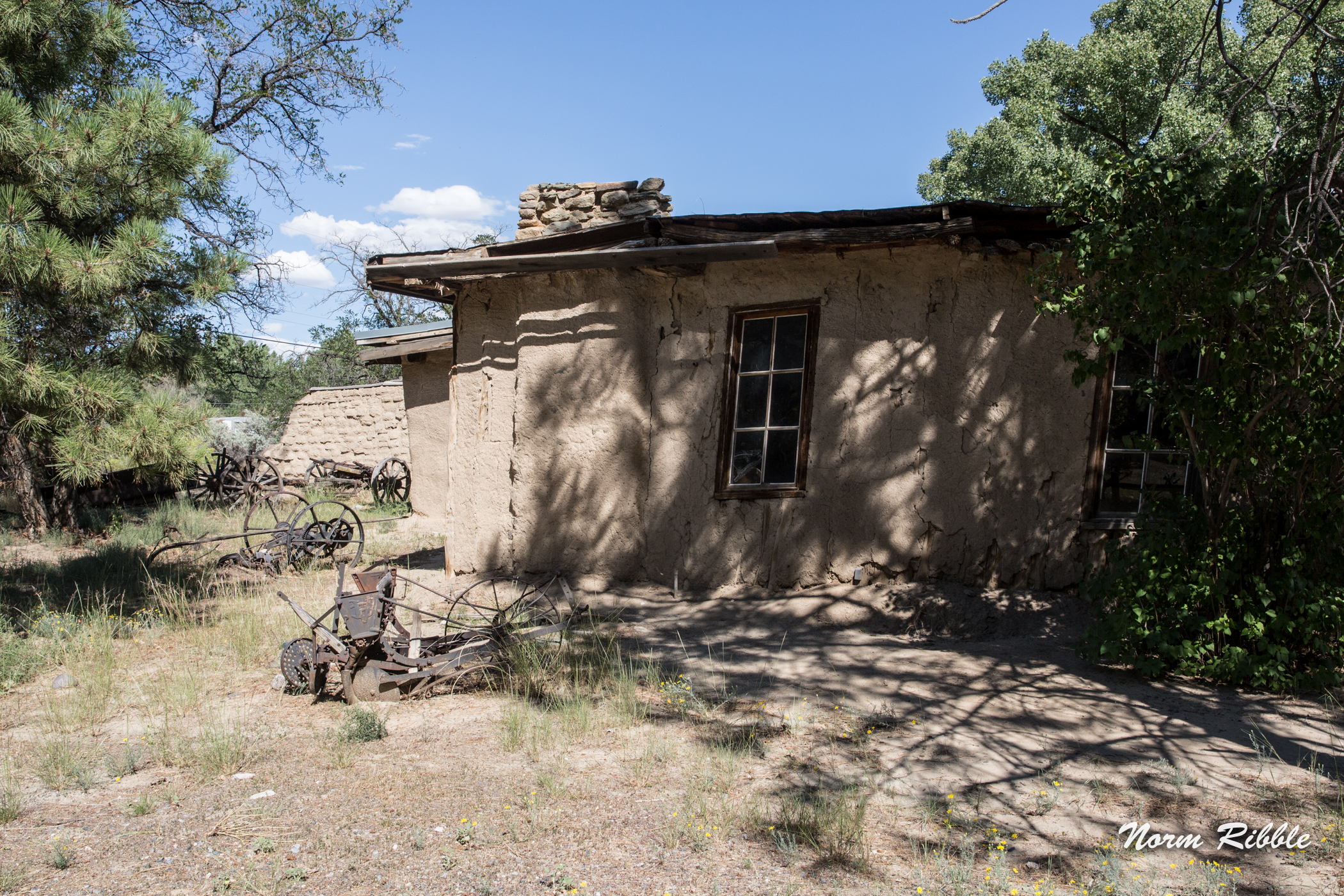 And even on old piece of irrigation pipe, but note the pipe is made of wood. 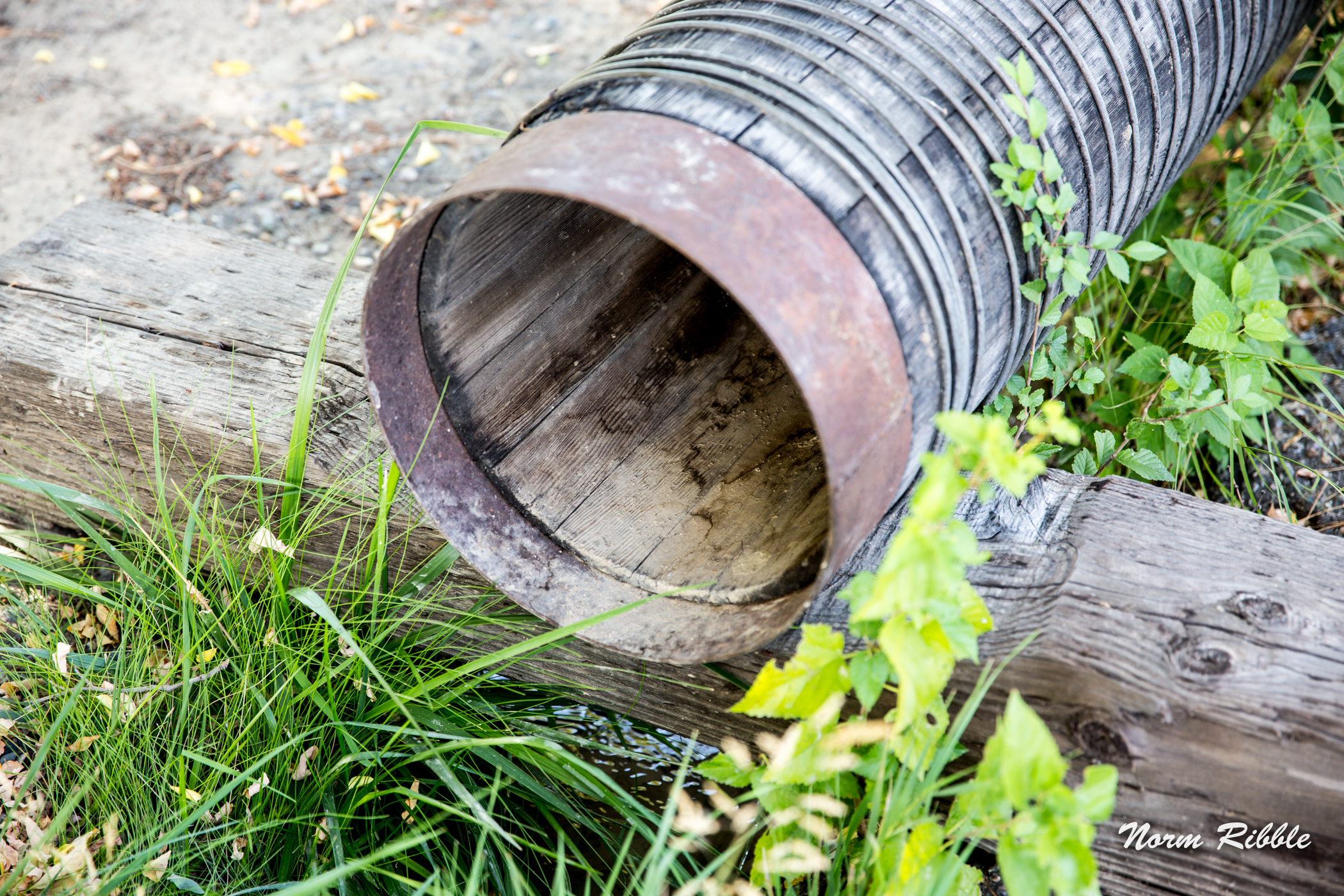 Here the story deviates from the normal, as adjacent to the Salmon homestead was an Indian Ruin; and through his life time and that of his descendent's, they protected that ruin. His son George, when of age homesteaded the 160 acres that contained the ruins.

The Salmon ruins were built about 1090 and the people were referred to as Chacoan Outliers, of which there were many. It is known that within 4 miles of here, there were some 29 other inhabited sites. First the Salmon Kiva. You'll experience the fullness of a Kiva in just a minute; when we reach the Aztec Ruins, where there is a completely restored Kiva. 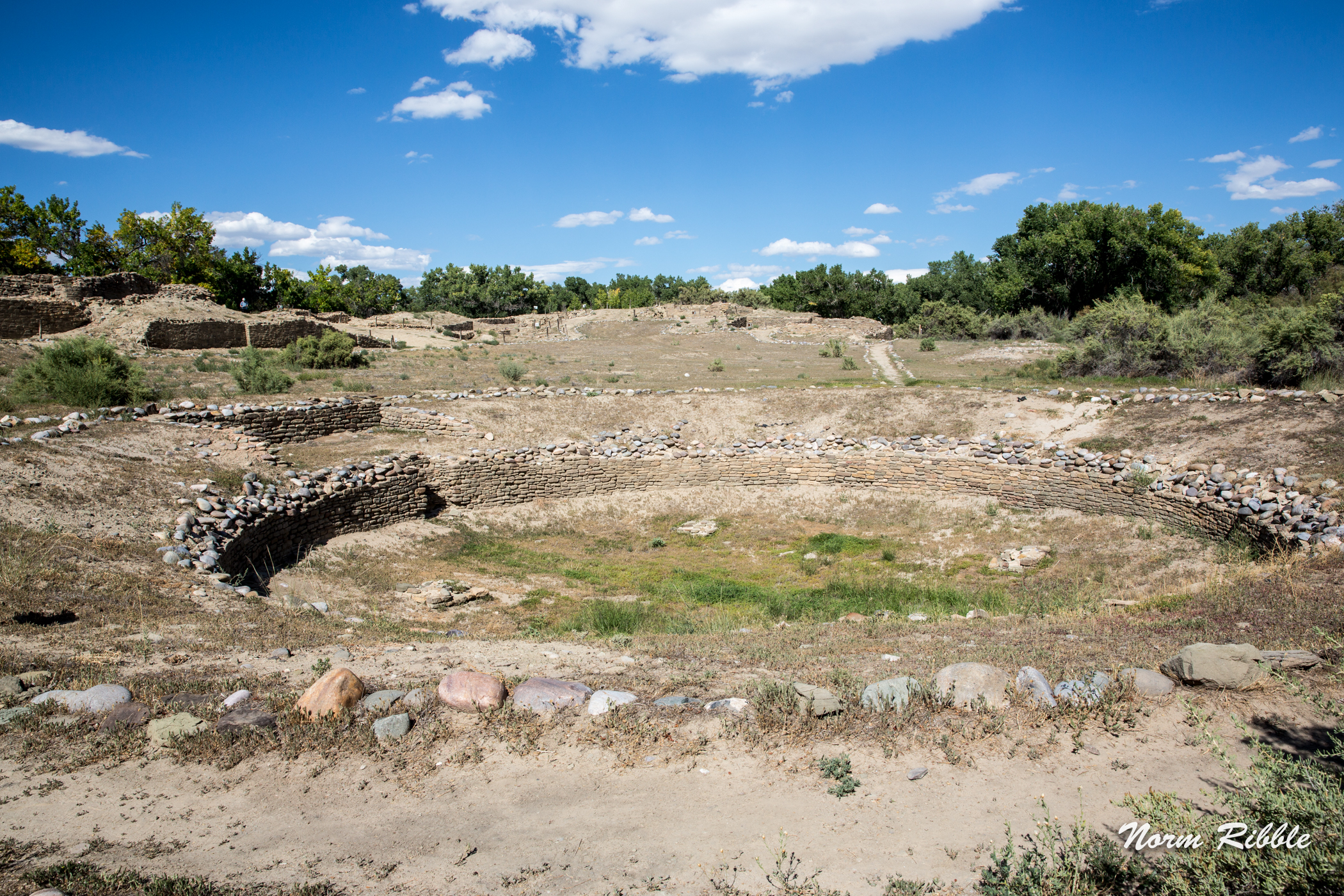 Look at the wall construction, and again note the same skilled masonry walls that we find in Chaco Canyon, though using a different stone. This was a three story structure with the ground floor having 150 rooms and another 67 on the second story, and an unknown number on the third floor. Archaeologists estimate that 200 ~ 300 people lived here. 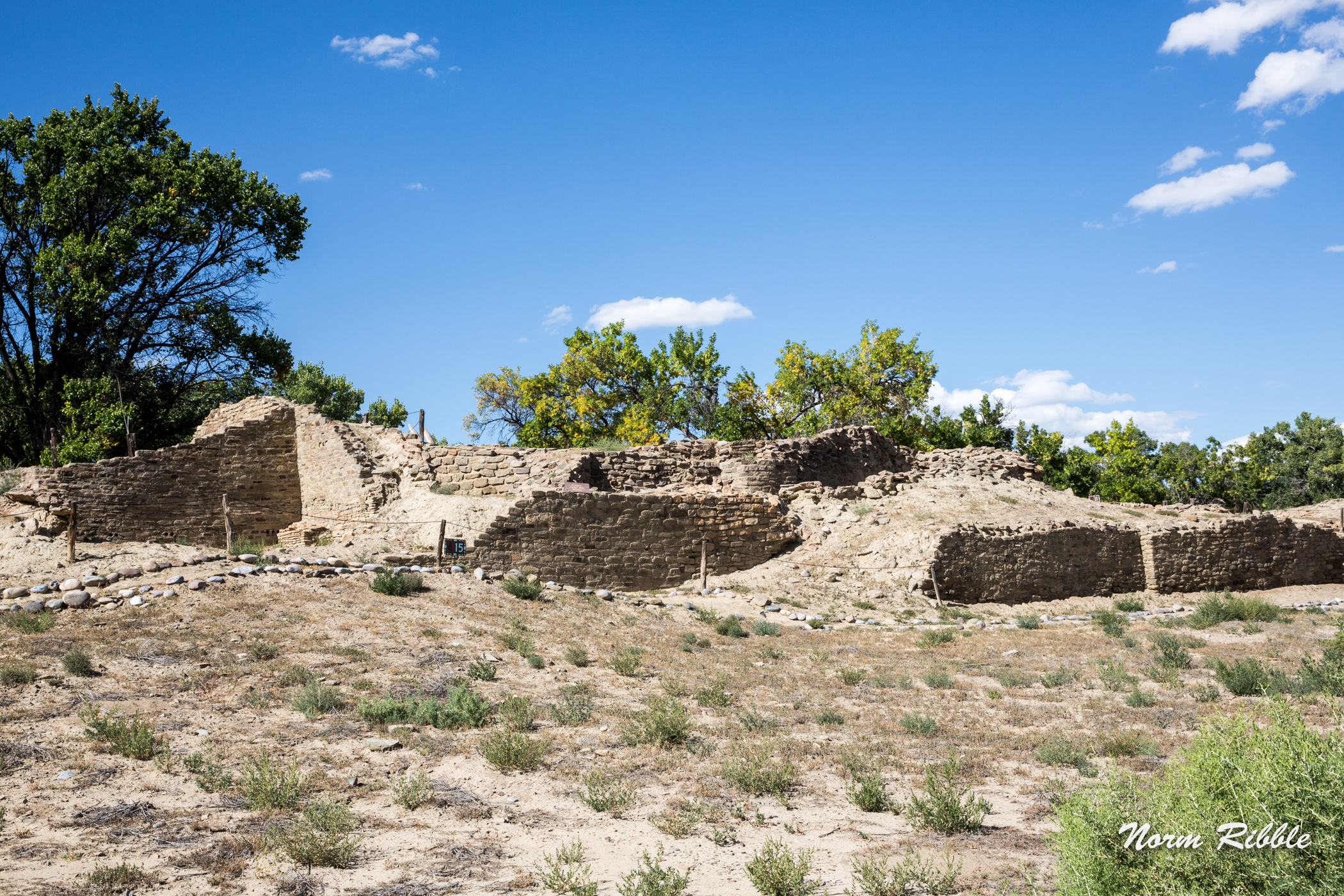 To the Salmon family, thank you for preserving this for us and for generations to come. 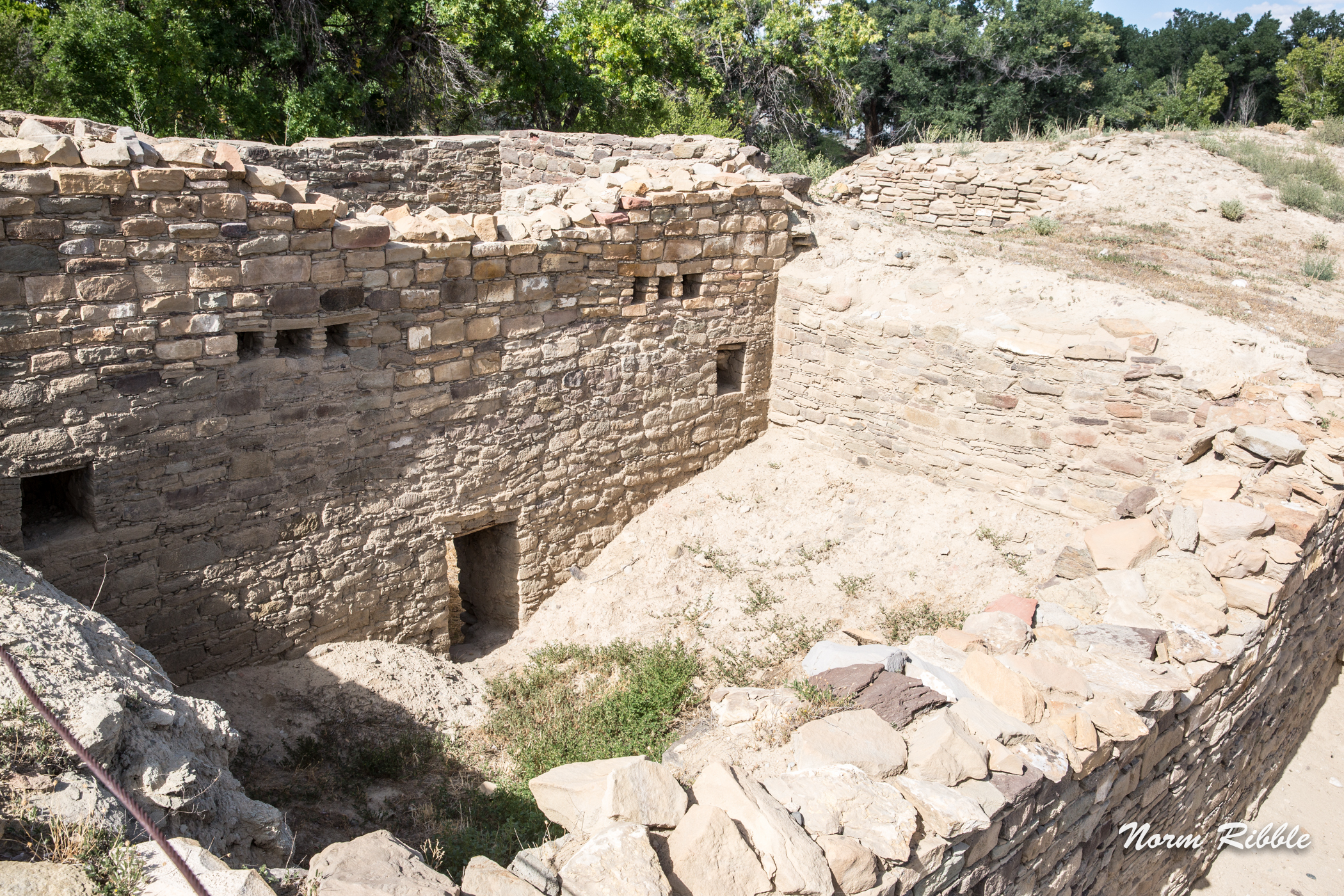 The Aztec Ruins are considered to be a part of the World Heritage designation of Chaco Canyon.

The Great Kiva was excavated in 1921 and reconstructed in 1934. It is thrilling to experience the sereneness their Great Kiva. Remnants of the actual plaster were discovered during the excavation, and when reconstructed the same material was used to plaster the inside walls. 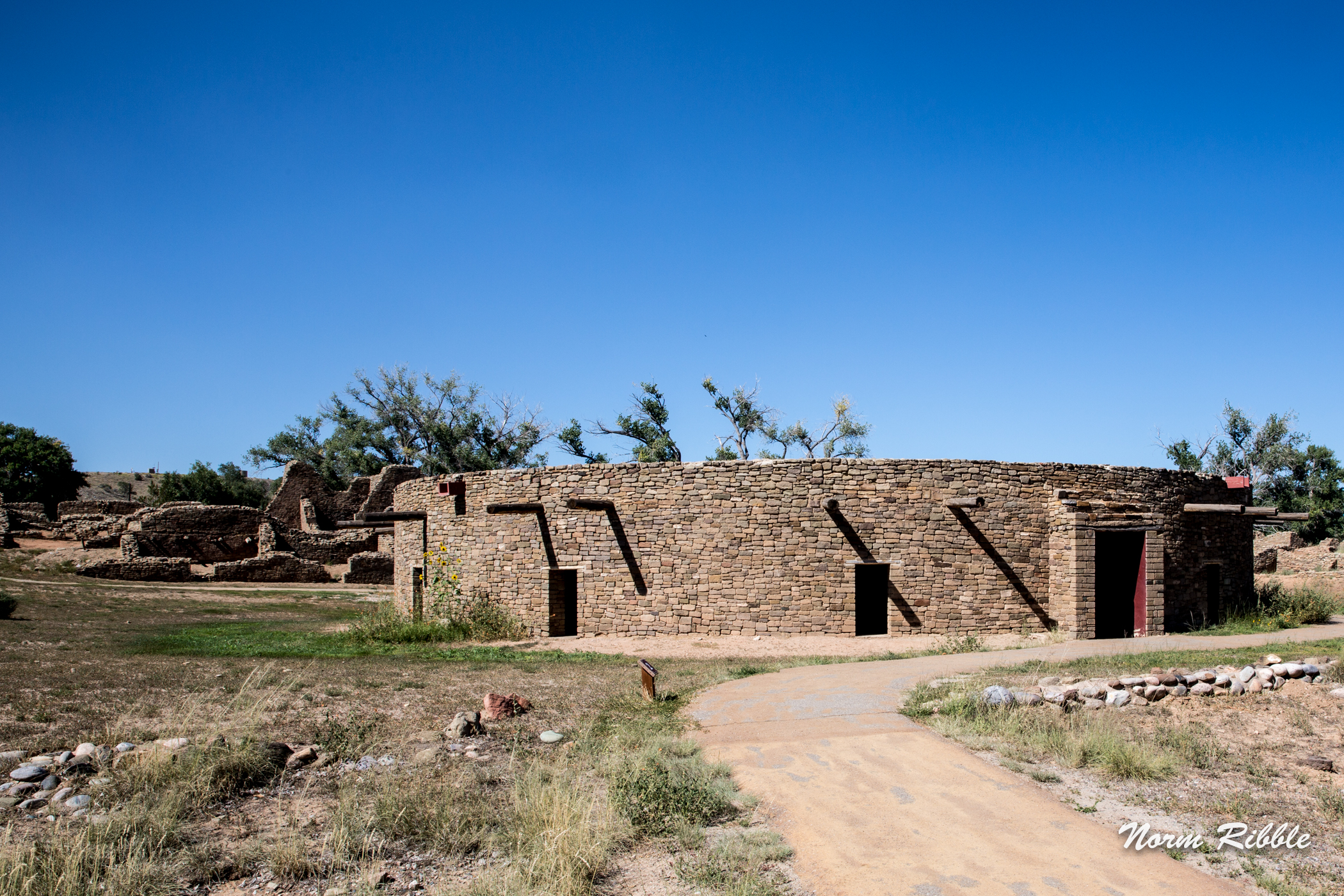 There is a quiet beauty present on entering this Great Kiva. 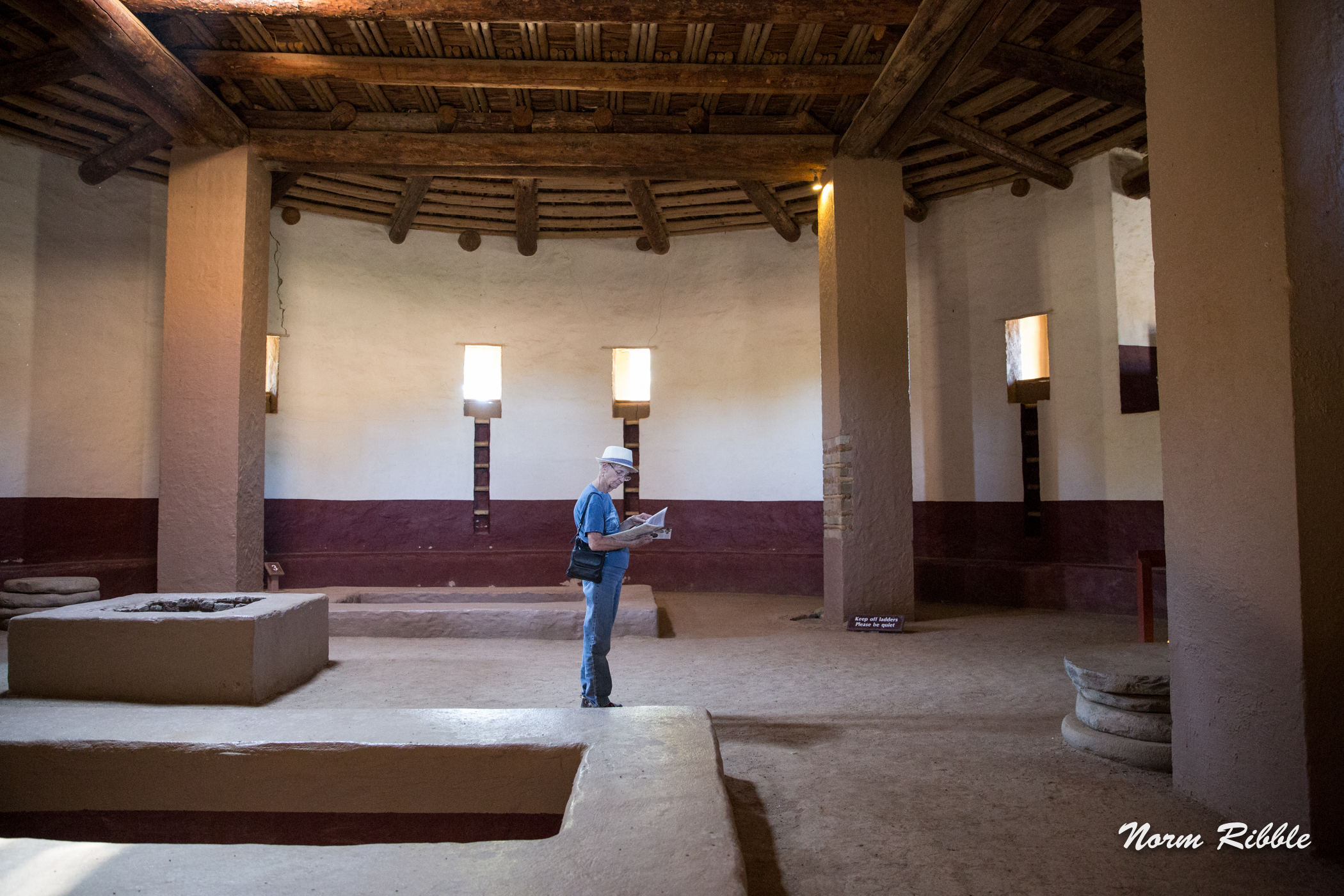 Notice now the construction of the ceiling, as it is actually 4 feet thick. Inside the Kiva was their place for ceremonies; but on top of that was a playground for the children, and where the tribal dances were held. 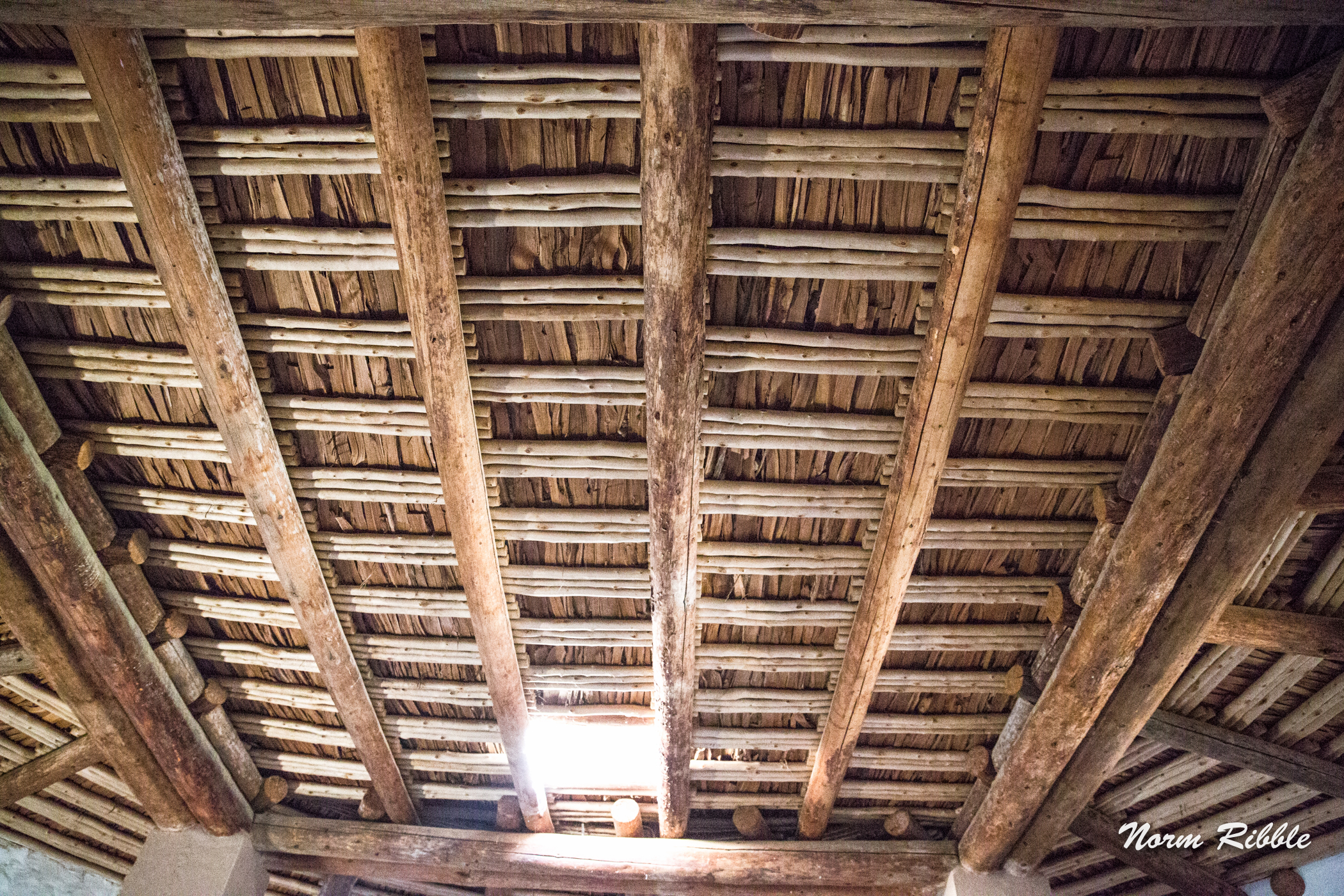 The Aztec Ruins are suggested to have been built about 1000, and again you see the influence of the Chacoan masonry in affect. There are about 400 rooms in this structure. The Animas River flows through this area. 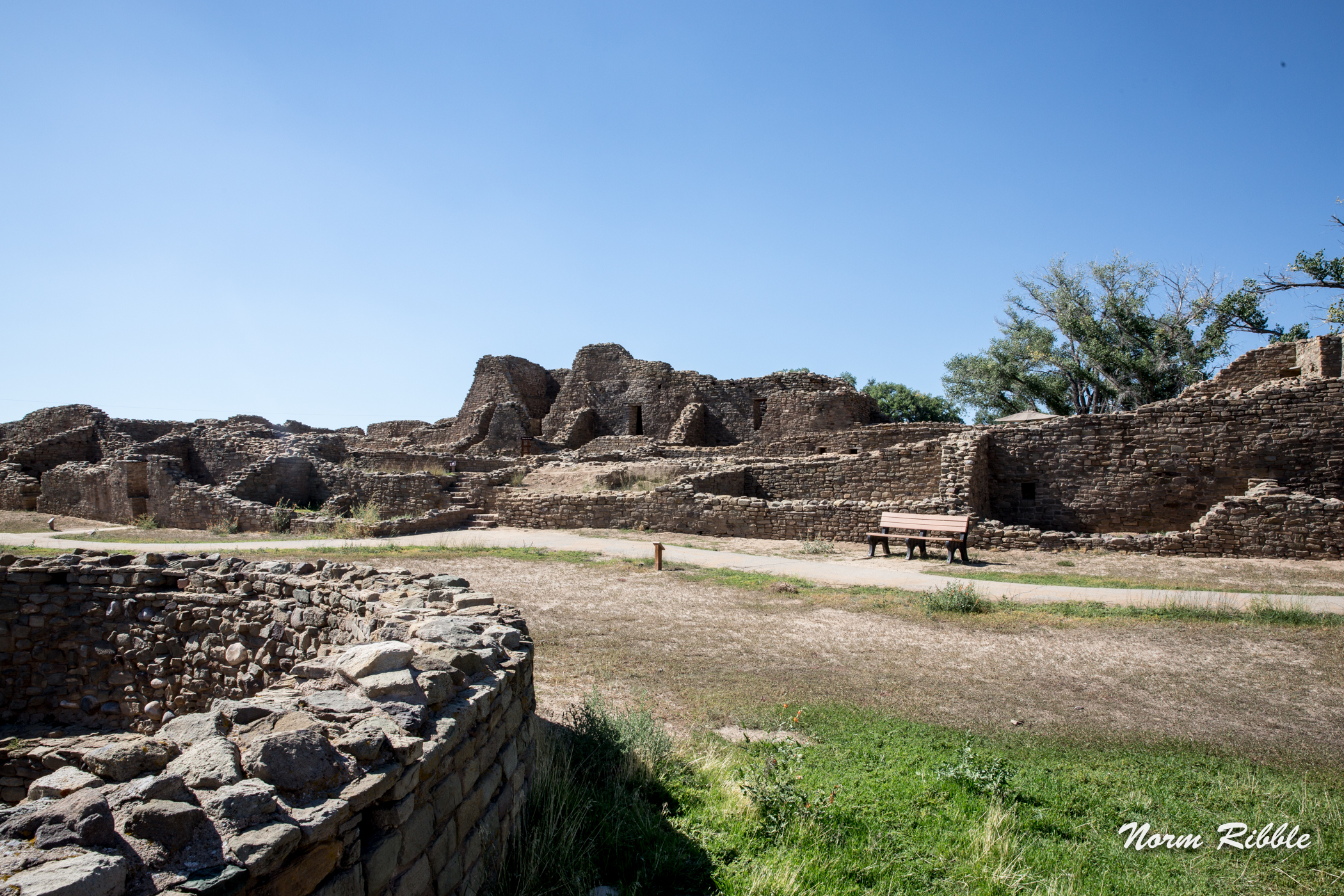 I love this photo, as it shows the access around the outside of the dwellings and also acts as a giant ventilation duct. Too, remember these people were small men with an average height of 5 feet. 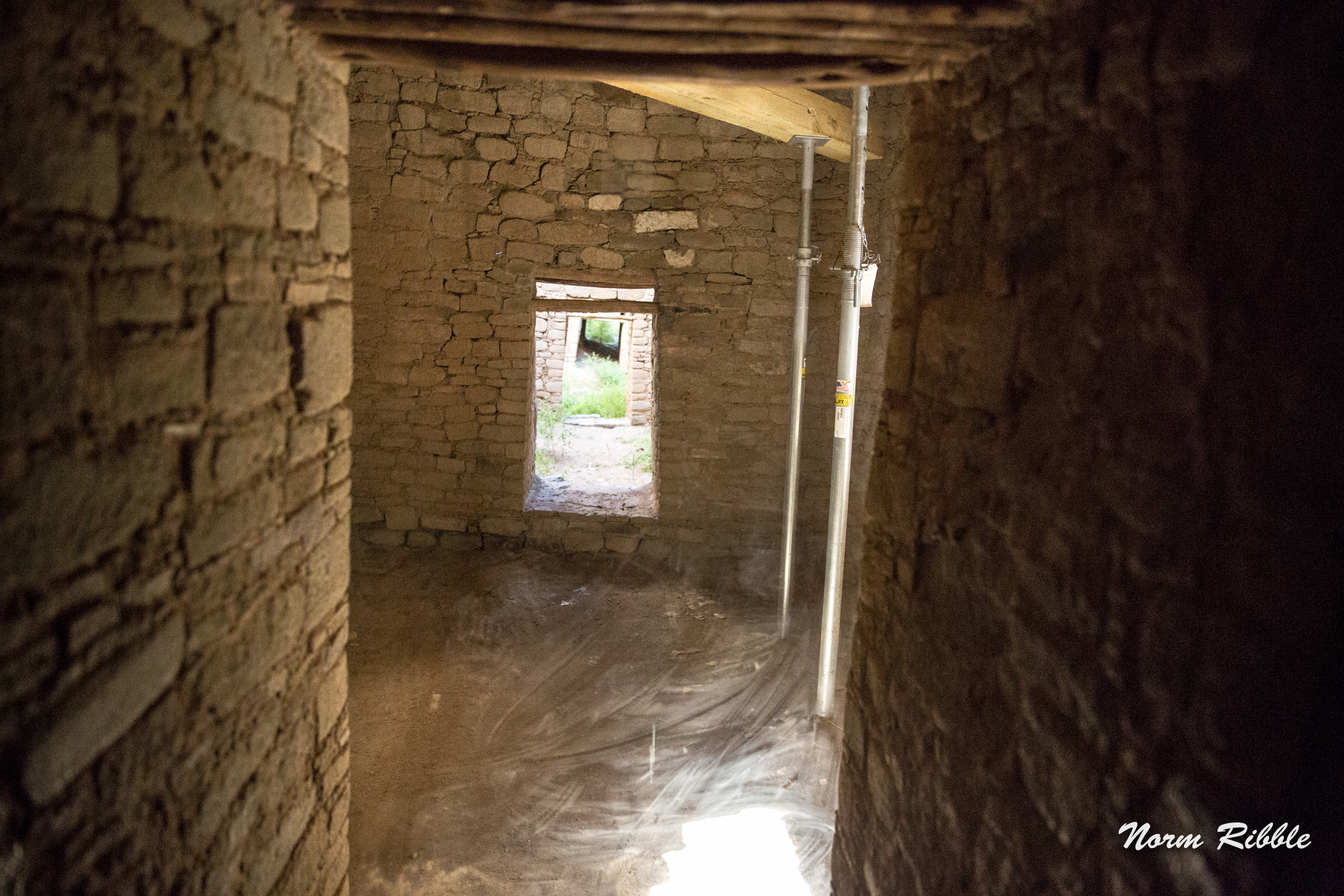 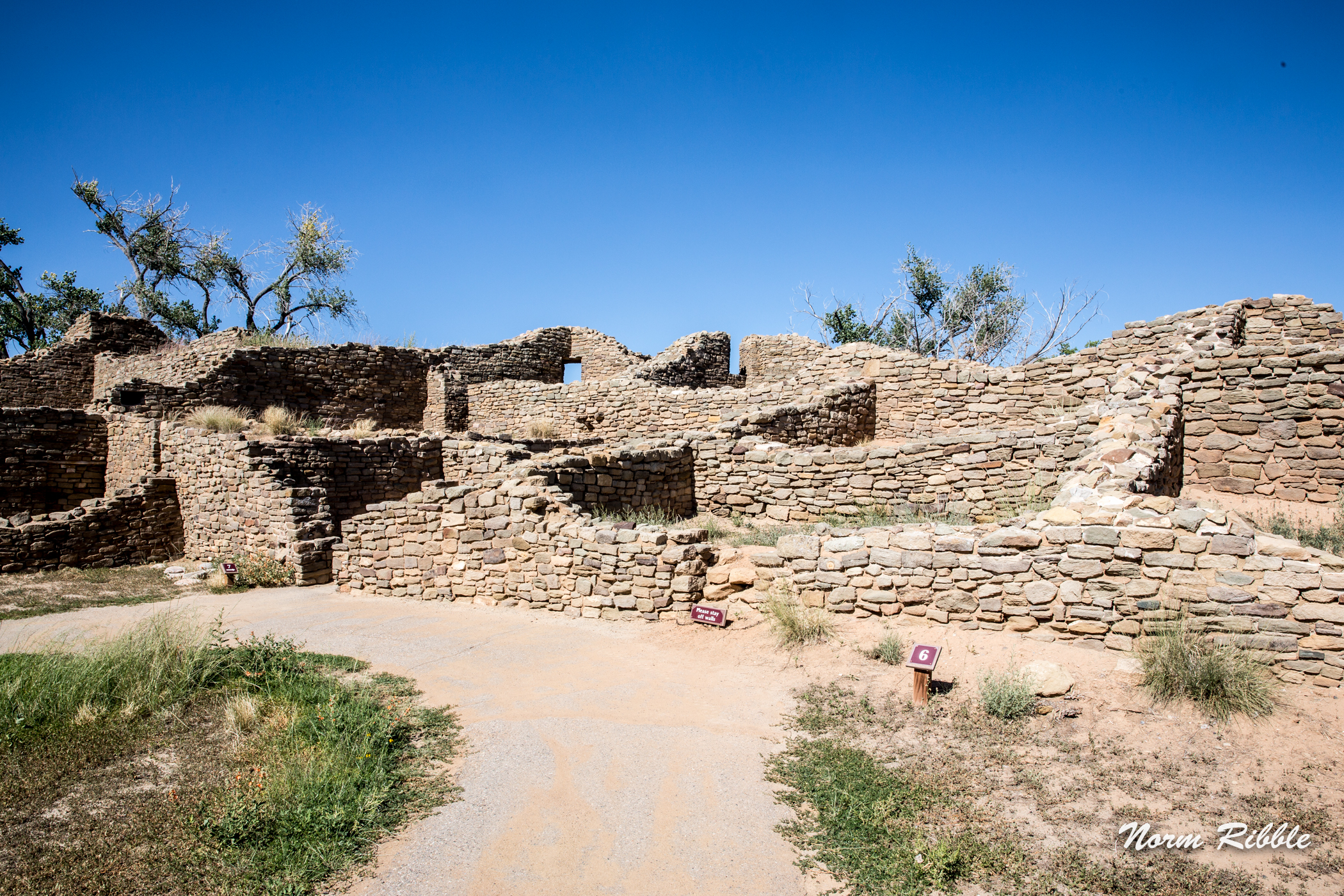 The Patio and back ground of the Visitor Center. What a beautiful setting and Oh! so comfortable. This is a relaxed and beautiful National Monument to visit. You'll love the ambiance. 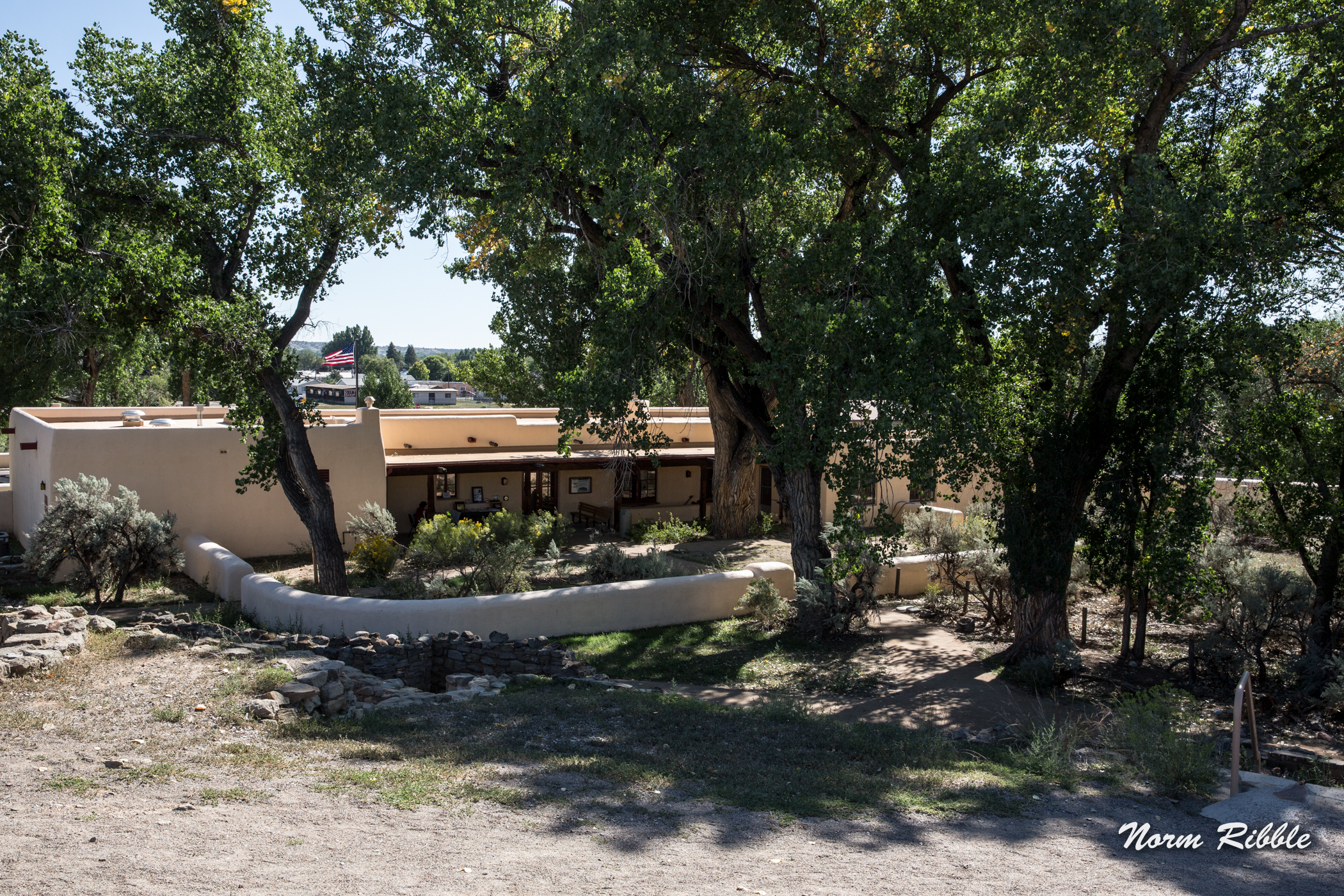 Before we leave Chaco Canyon and the Chacoan Outliers on this visit of ours, please add these sites to your Bucket list. If one hasn't a day to make Chaco Canyon, at least visit these two easily accessed sites: the San Juan County's Salmon Ruins and the National Monument of the Aztec Ruins. You will be abundantly enriched!

With this we'll leave this the earliest of our Pueblo people and venture north some 70 miles northwest to the Cliff Dwellers of Mesa Verde. You'll want to come and go with us, as Mesa Verde is another of our World Heritage Sites; and this will finish the known history of our earliest native people of the Southwest.

Come on Willie sing us another verse, and we’ll move on down the road.