The State of Utah

We visited here between September 11th and October 5th, 2016

The Fantastic State of Utah is best explained by their State Symbol, 'The Bee Hive.' A universal symbol of the "Honeybee and Work", and it fits Utah's motto of "Industry"

This is a photo of a Utah road sign, that I captured for this Log. I love their declaration of "Work" repeated mile after mile, as one traverses the beautiful Utah. No Slackers Here! 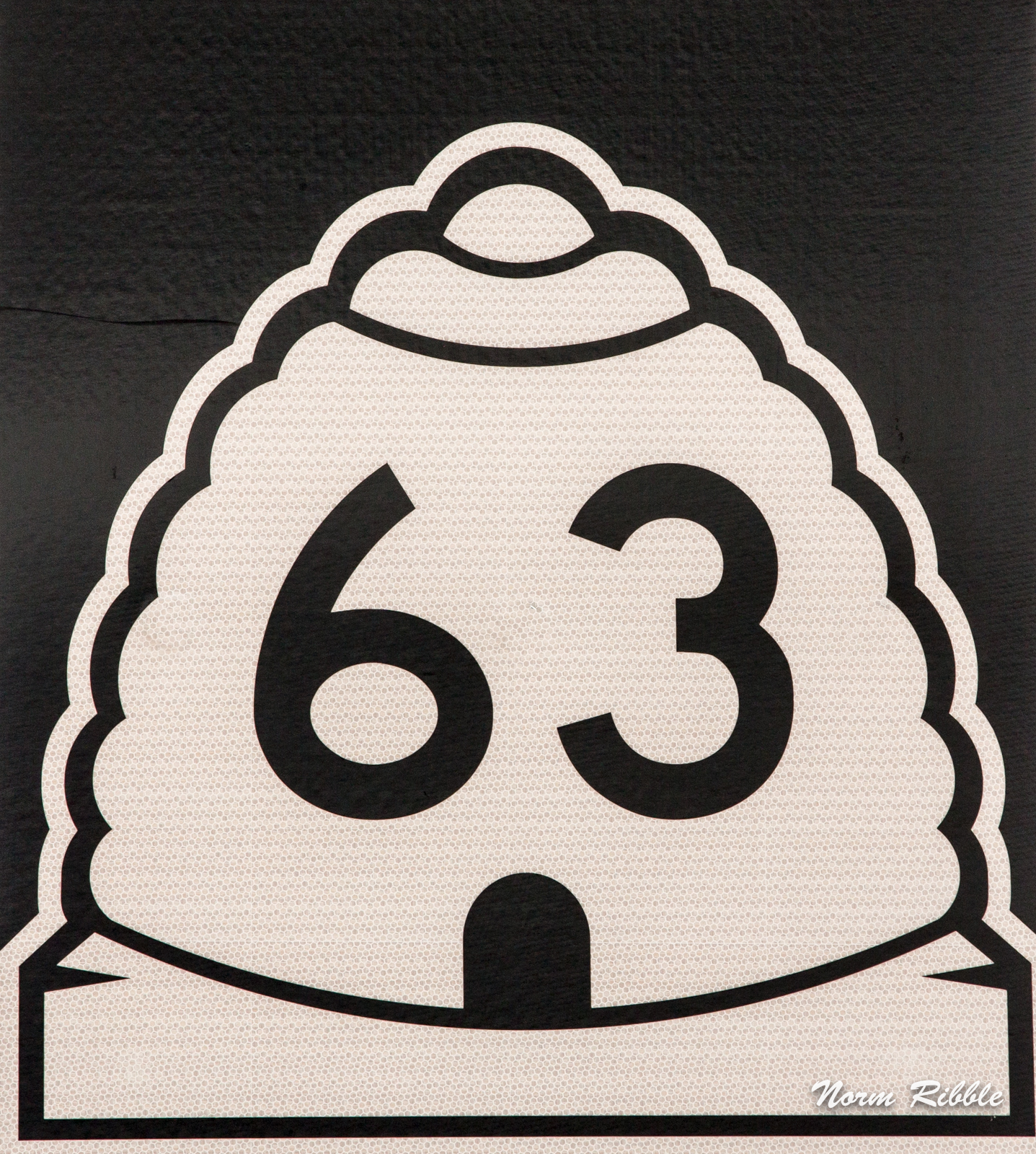 I stated this previously but Utah has 5 National Parks and 7 national Monuments, the largest number of any State, other than the District of Columbia.

Utah was settled my Brigham Young leading the Mormon people west to find religious freedom, and freedom from persecution. The first wagon train reached the Territory n 1847, and this was just prior to the end of the Mexican War which was settled in Messilla NM in 1858.

A most interesting observation to me is that the Mormons, The Church of Jesus Christ of Latter Day Saints, came to Utah as whole communities. They were educated settlers and among them were Lawyers, Doctors, Educators and Engineers. They were a completely different type of Western Pioneer than the western expansion had experienced before. By 1961 there were over 70,000 inhabitants on Utah's Wasatch Frontier. Too, they were very aggressive and organized in their missionary work and in settling areas of Nevada, Arizona, New Mexico and old Mexico. Too, they quickly mastered the art of irrigation and drainage and to this lies their success as Pioneers. Even today Utah State University holds world acclaim in the field of Irrigation and Drainage.

Utah was admitted as the 45th State of the United States and would have been recognized earlier except for their practice of polygamy. The LDS church issued a Manifesto in 1890 banning polygamy, and it seems this Manifesto paved the way to Utah being accepted as that 45th State.

This year our travels have been to the Western National Parks and Monuments. Just look at those we passed through here and all of these in Southern Utah. 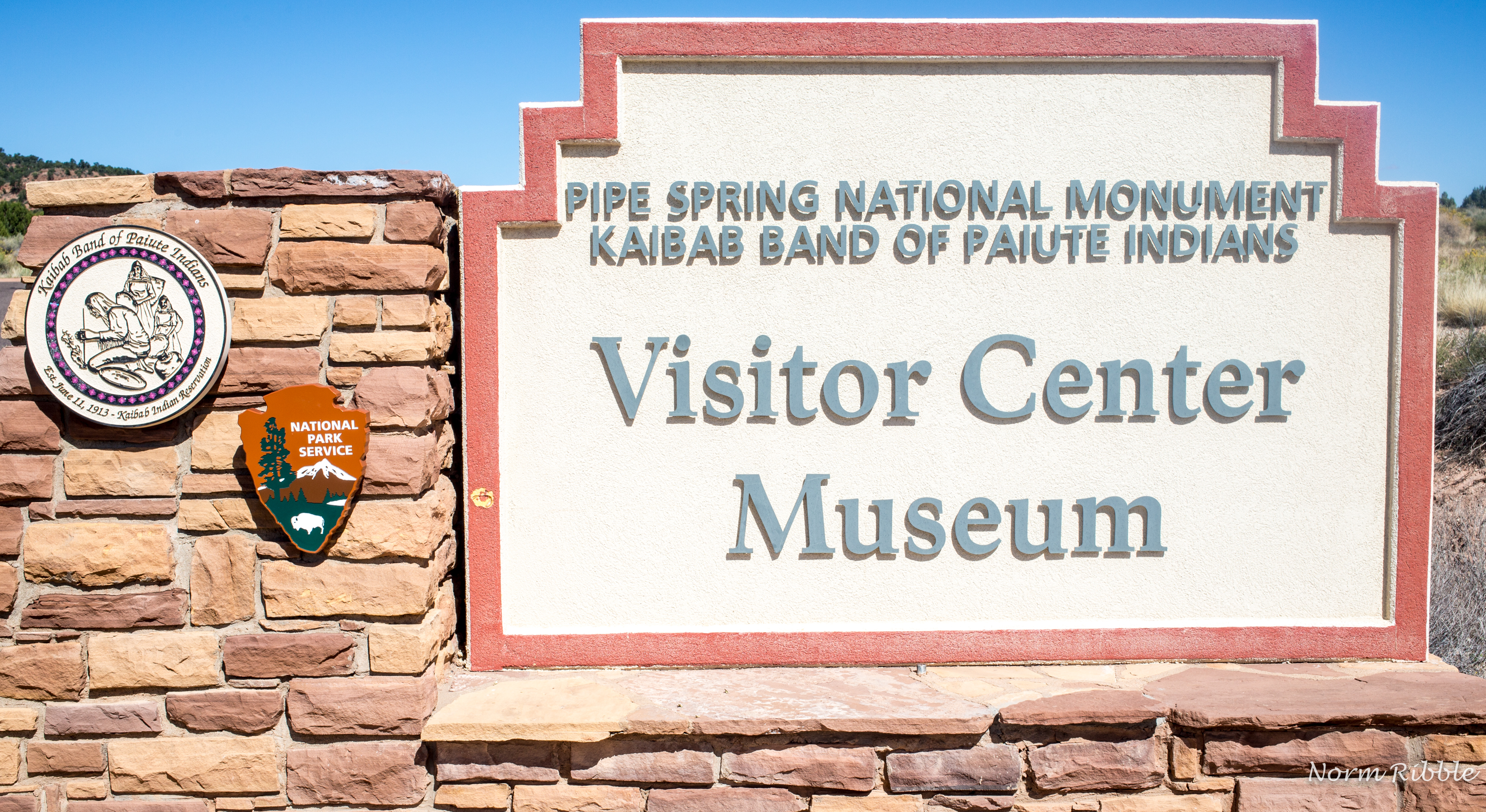 While we are here let's not forget St. George which was the southern capital of the Mormon or LDS empire' as it was carved in the late 1800's. It was here that the first LDS Temple was built even prior to the the World renowned LDS Temple in Salt Lake City was completed. Too, it was here that Brigham Young had his winter home. This home is magnificent, and one must remember it was built in the 1870's almost a hundred and forty years ago. 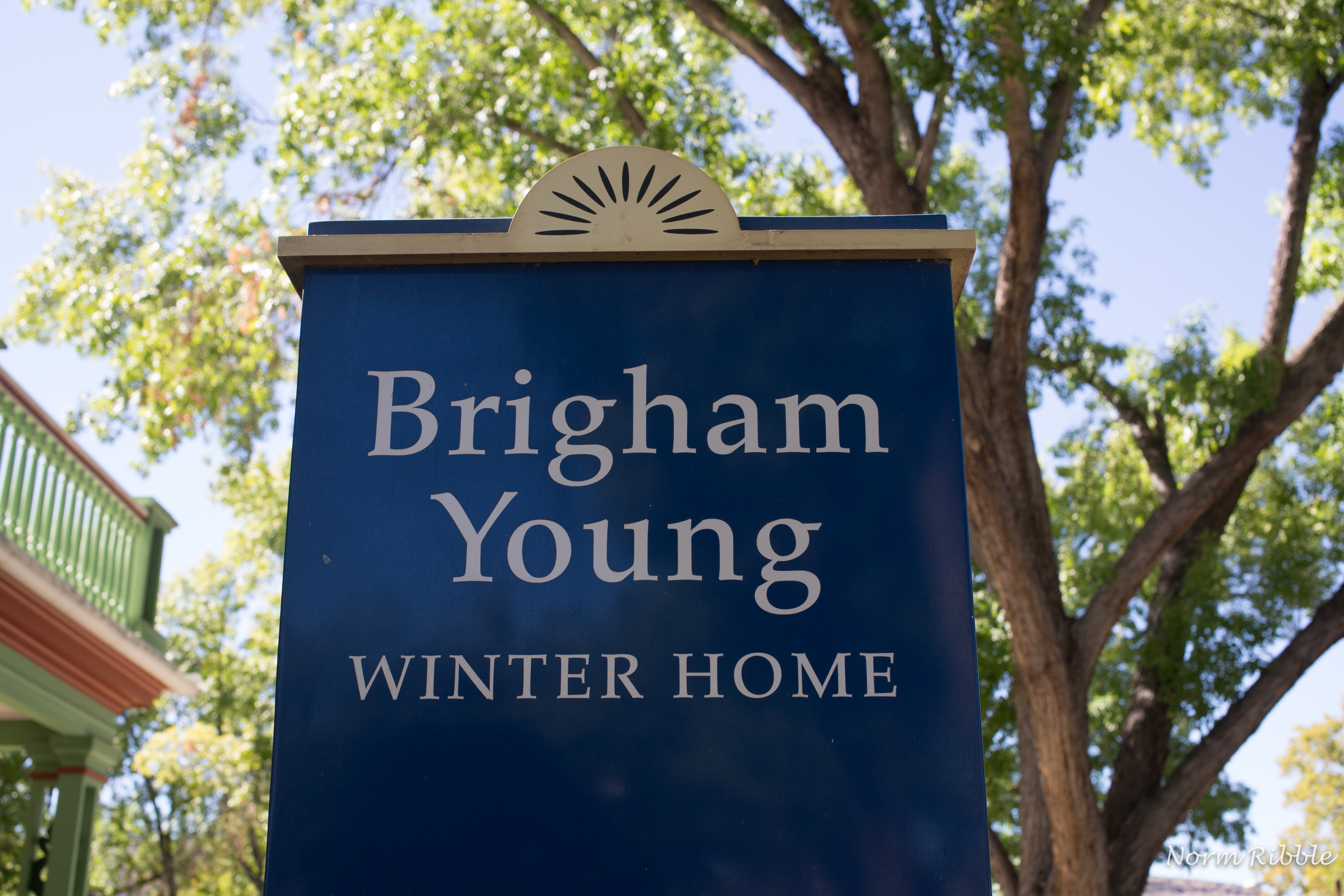 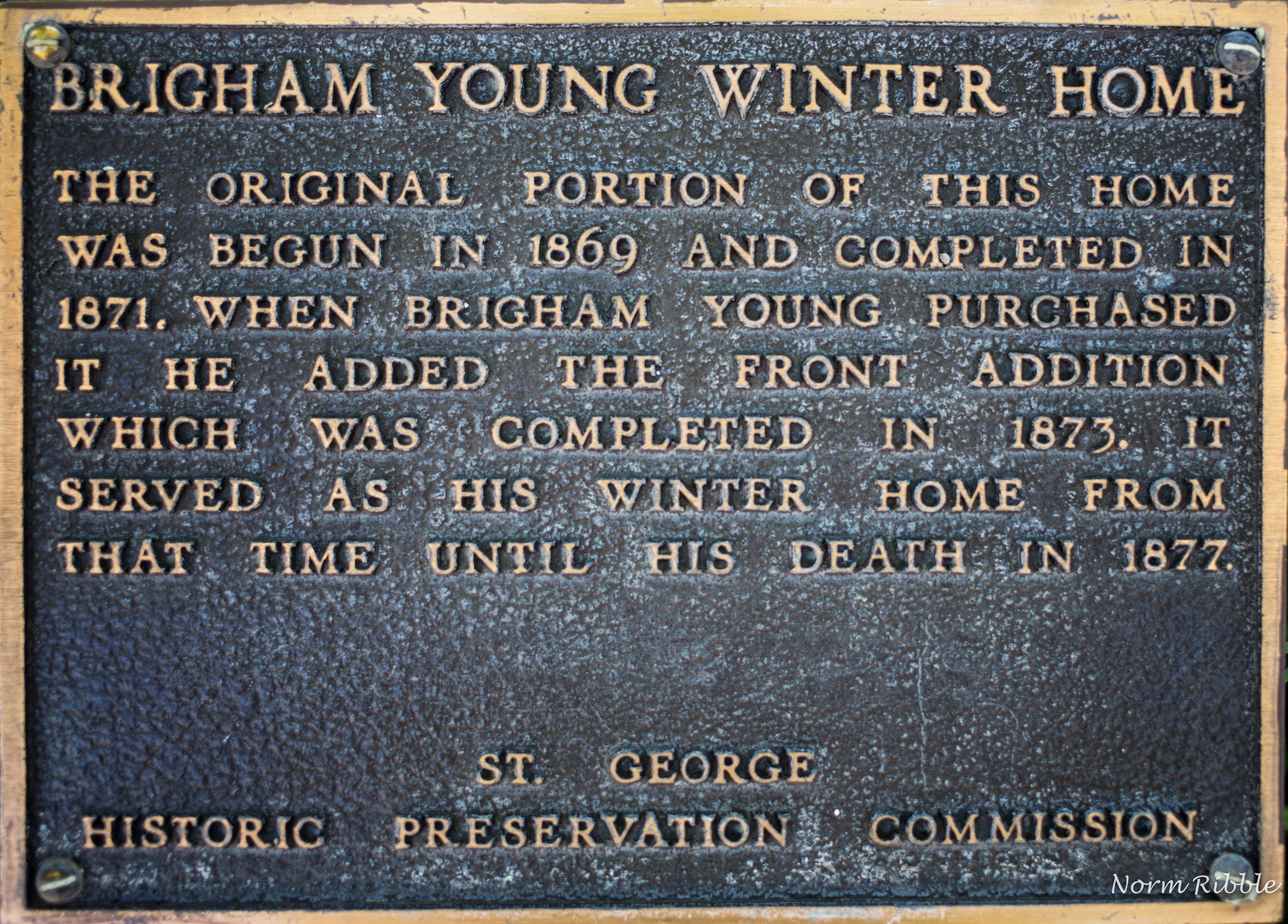 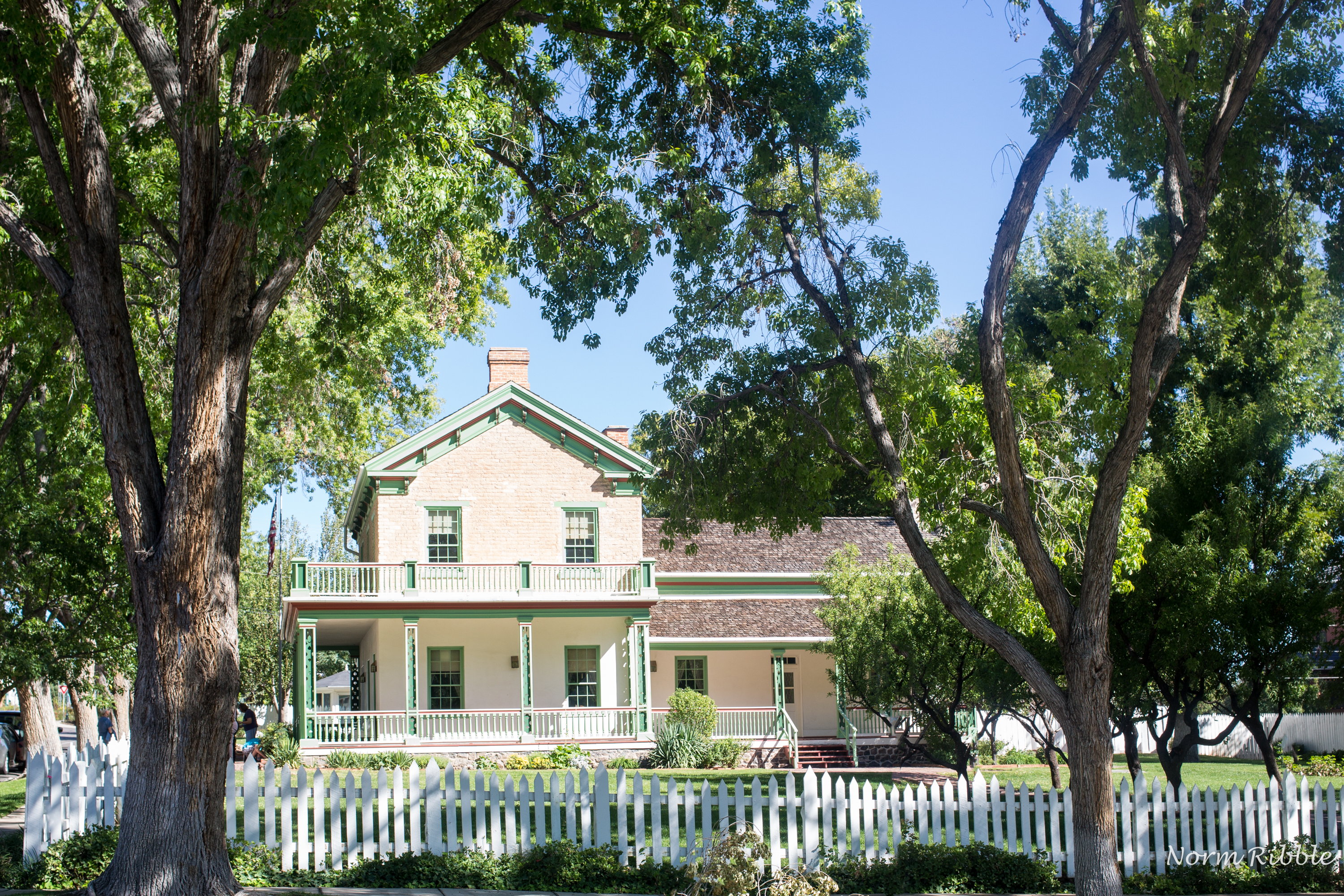 This home was built by Craftsmen, and they lacked the refined building material so available on the east coast. If they wanted to accent with a marble face, they took fur or spruce timber and crafted it to appear as marble. One has to look with a practiced eye to note the difference even today. Stunning.

We're in Brigham Young's bedroom and notice the Top Hat and the Stylish Walking Cane. First Class and certainly modern with the times. 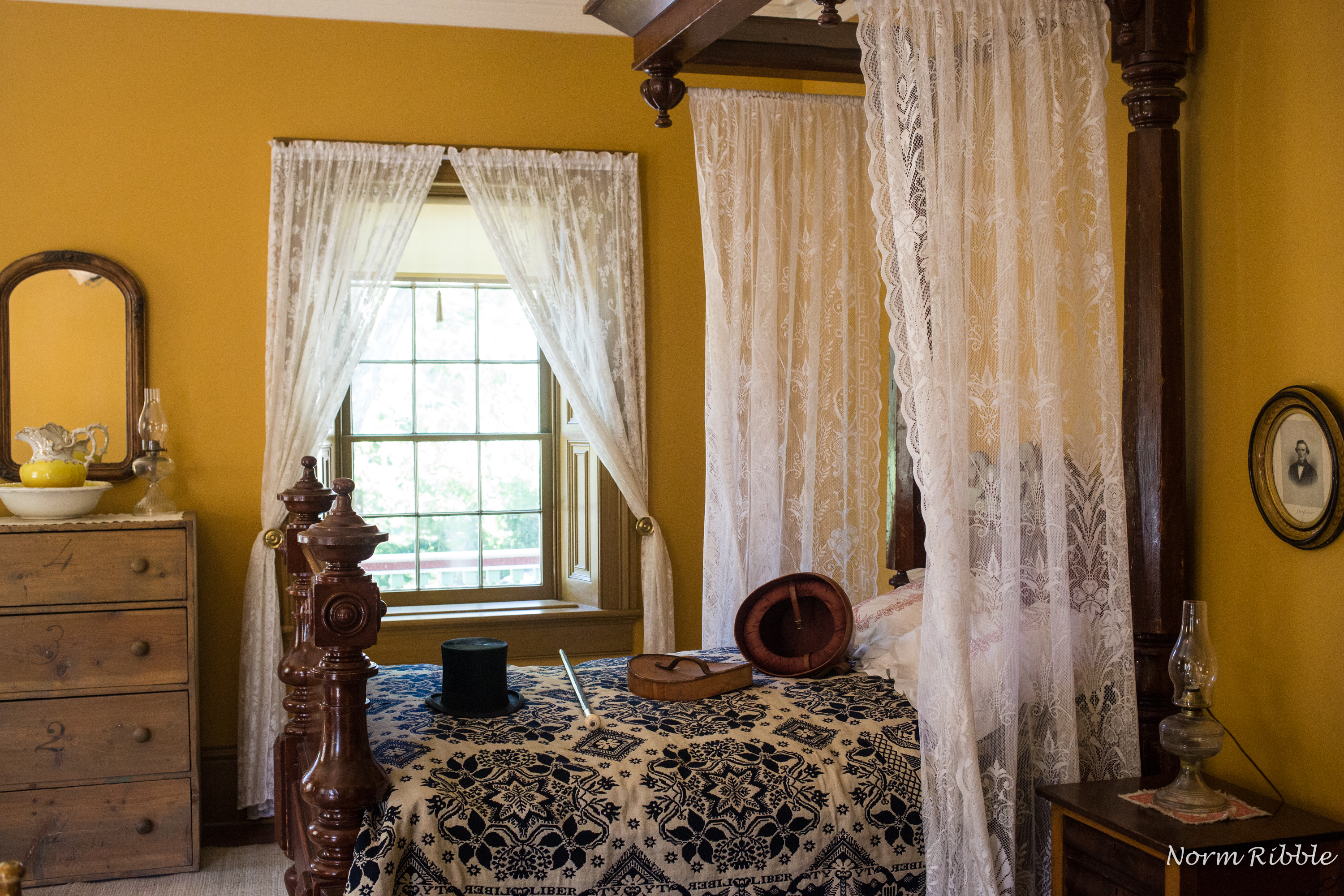 His bedroom table and his desk. How light and delightfully airy. 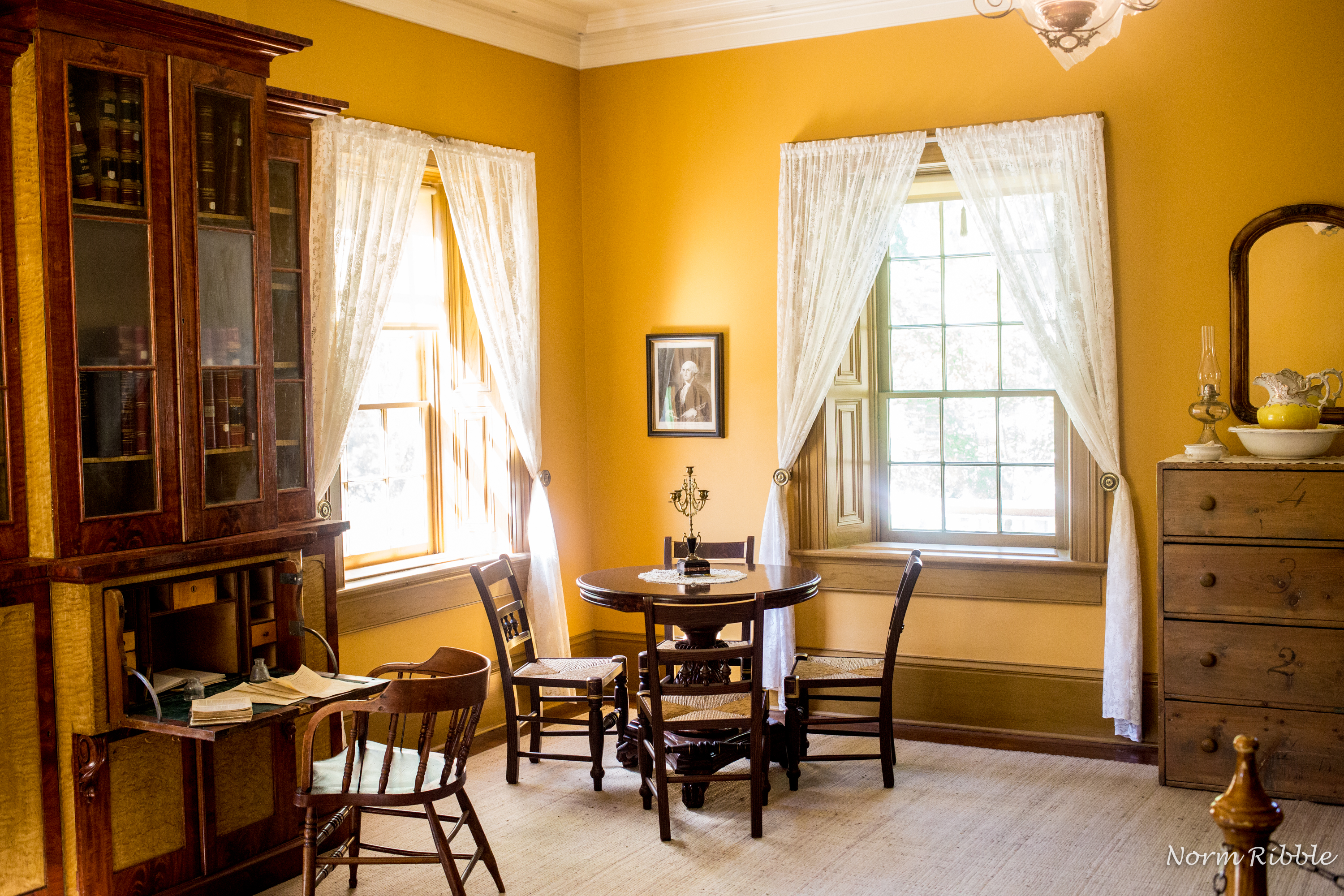 The Living Room and the elegant piano. 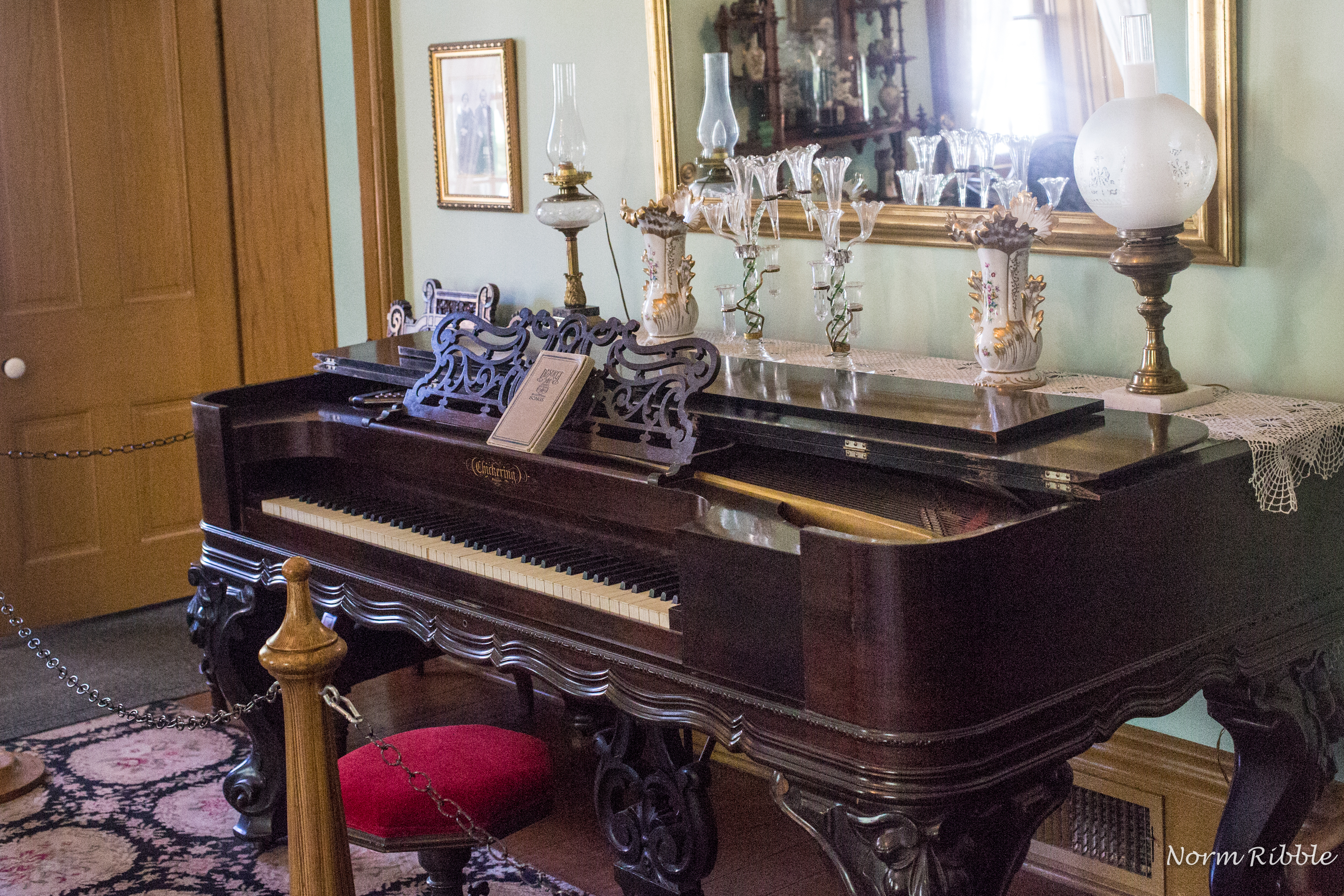 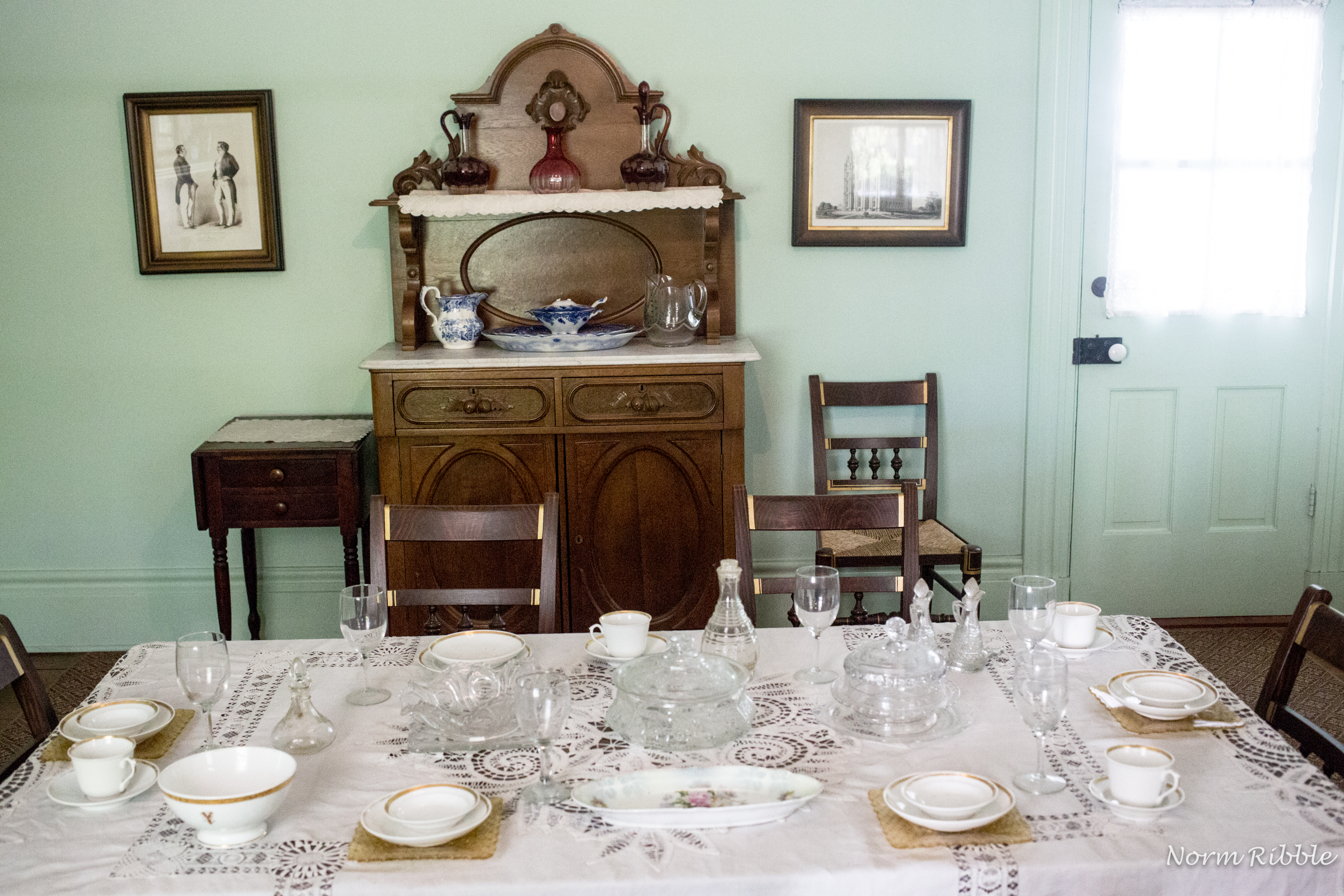 And of course the Kitchen, which I loved. It was just as I remembered from my Grandparents home in West Texas. The pressing irons, the waffle iron, the tea kettle and the biscuit tray are all on top of the stove. Also those all important side buckets, where the warm water was. At Grandmothers, the only heated room in the house was the kitchen; and the warmth in her kitchen didn't come by setting the thermostat up a notch or two. One built a fire in the stove and used the wood chopped weeks previously. Oh! how I'd scurry to that stove in my PJ's to dress, and being very careful not to touch that ole hot stove. Now Brigham's kitchen is much more elegant than Grandmother's West Texas kitchen, but I'll bet his kitchen was that early morning room too 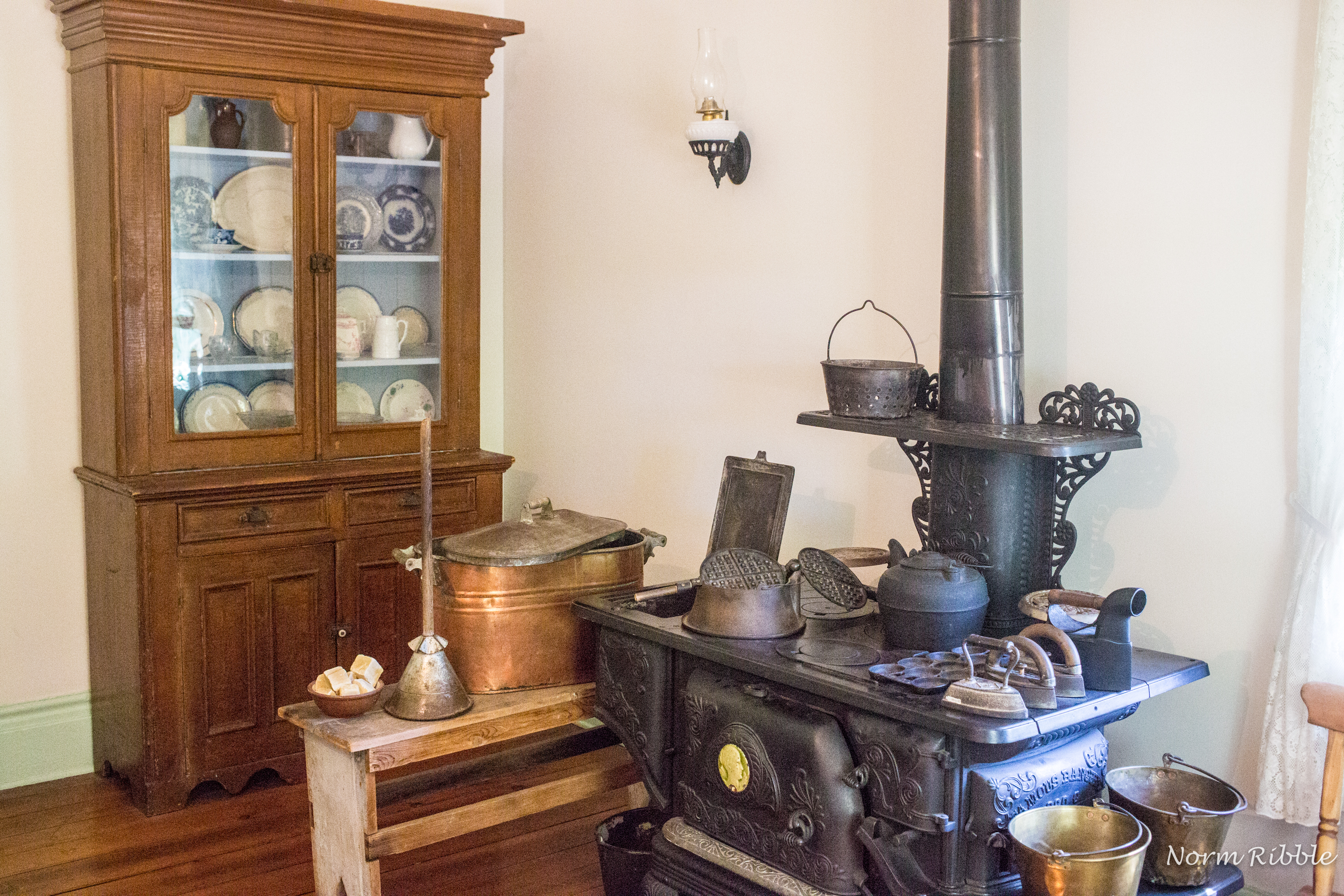 St George was also the jumping off point to the Arizona Strip; and the traveled road for the Mormon Settlers as they moved into other areas of Arizona, Nevada, both New and Old Mexico to settle and do their mission work. The first stop East along the Vermilion Cliffs would be at Pipe Springs. 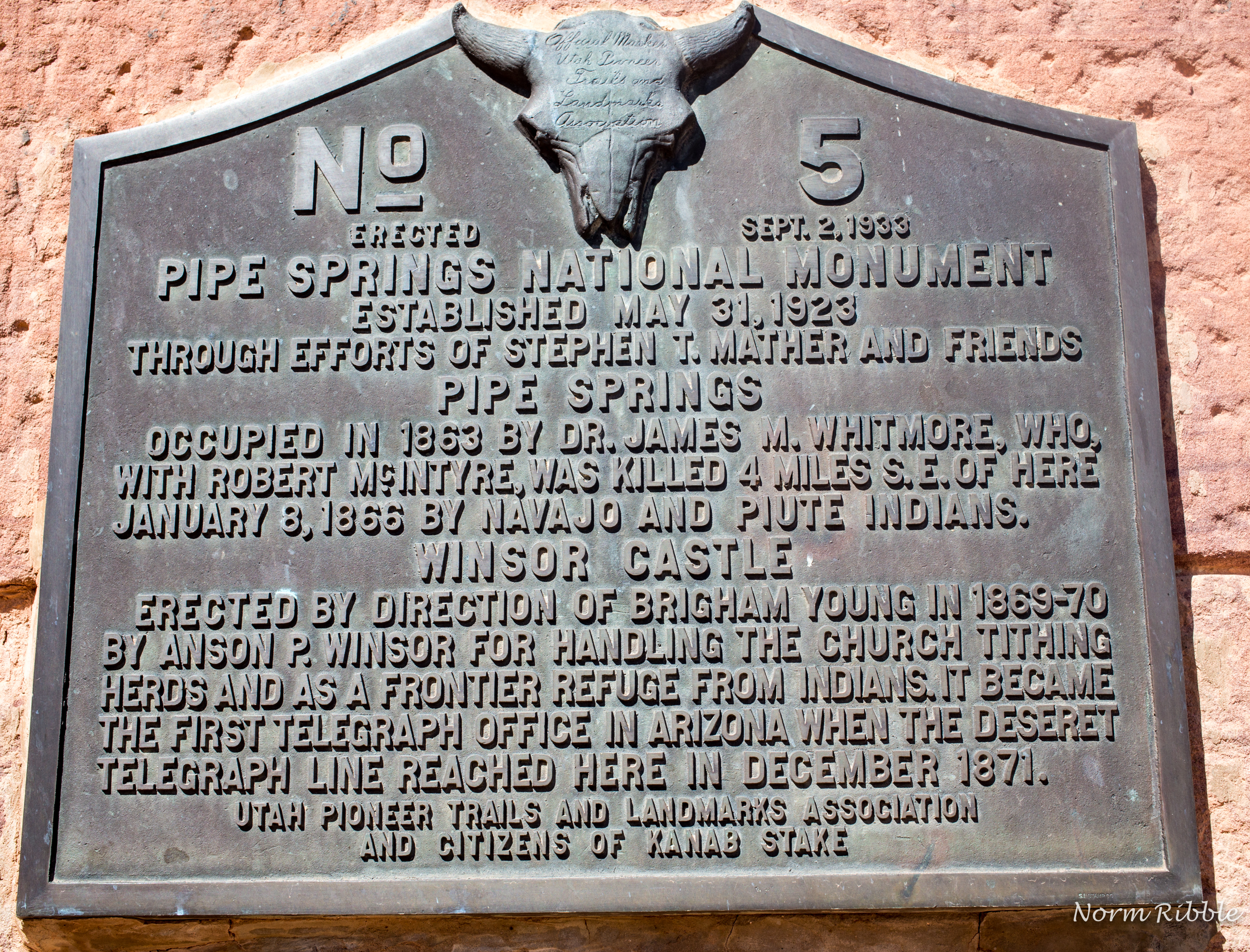 The importance of Pipe Springs is implied in it's name, the Spring. Water, the source of life, freely flowed at Pipe Springs. Too, in the 1880's there were thousands of acres of virgin grass lands; and what beautiful grazing country this was with plentiful grass and water. There were a few Paiute Indians in and out of the area, but in the settlement of the west they were a secondary element. Brigham Young had a fort built at Pipe Springs to command their operation, and they placed their fort directly over the spring and the water source. He who controlled the water controlled the land.

**Note on this plaque that the name of the Telegraph was the 'Deseret Telegraph Line." The Mormons called their home the Deseret State, and this name held until the US Congress named the Territory Utah after the Ute Indians Tribes.

Our National Parks Guide at the entrance to the Pipe Springs Fort. The young lady was from Oregon and quite pleasant and proficient in her presentation.

The building to the right was the home of the resident manager of the operation. The one to the left was the cheese manufacturing operation, the water trough for the water to flow through, and upstairs the bedrooms for the extra women or wives. The Fort took care of a couple of thousand head of cattle grazing on the abundant grass lands, the production of cheese, and in the days of polygamy some space for those extra wives. 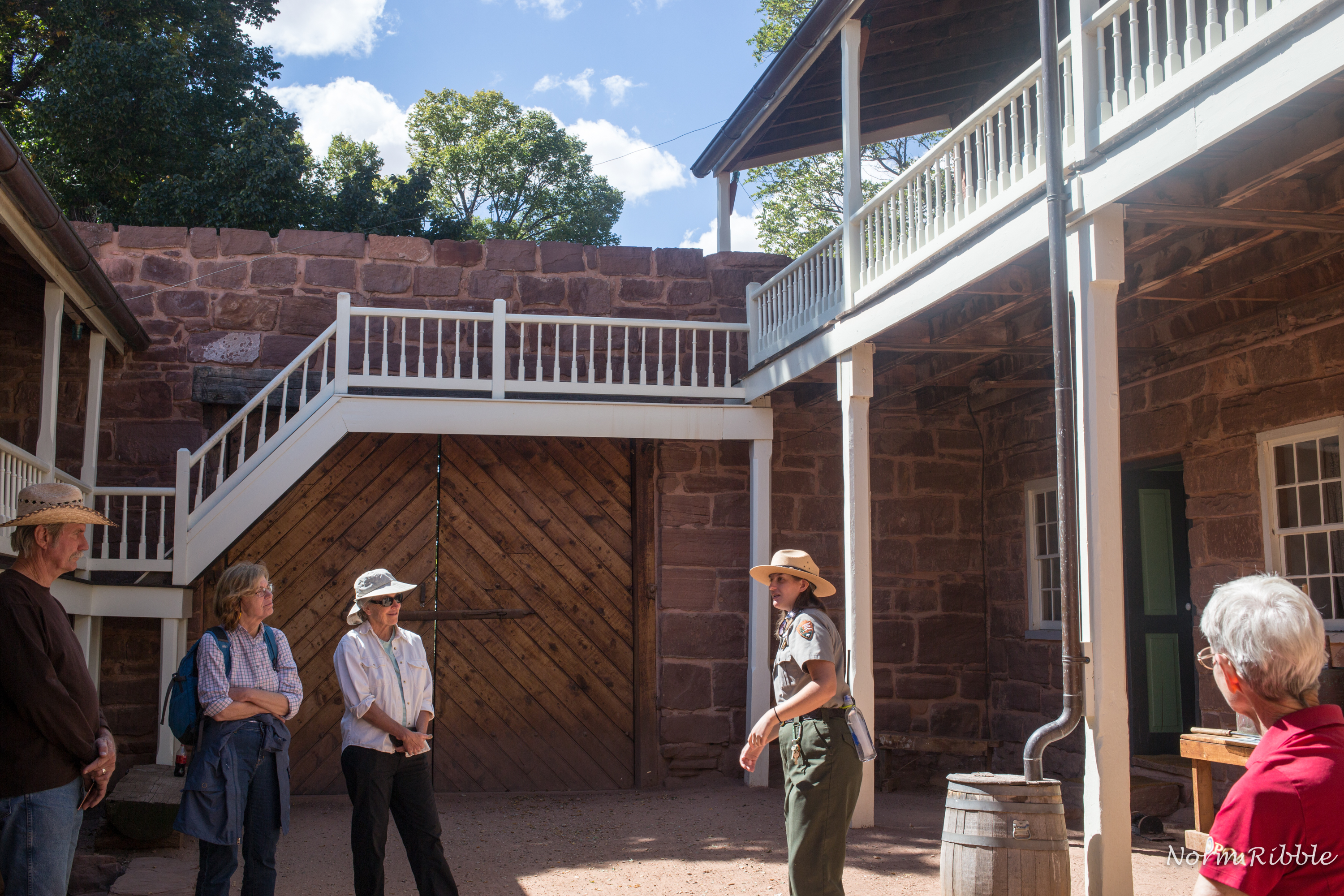 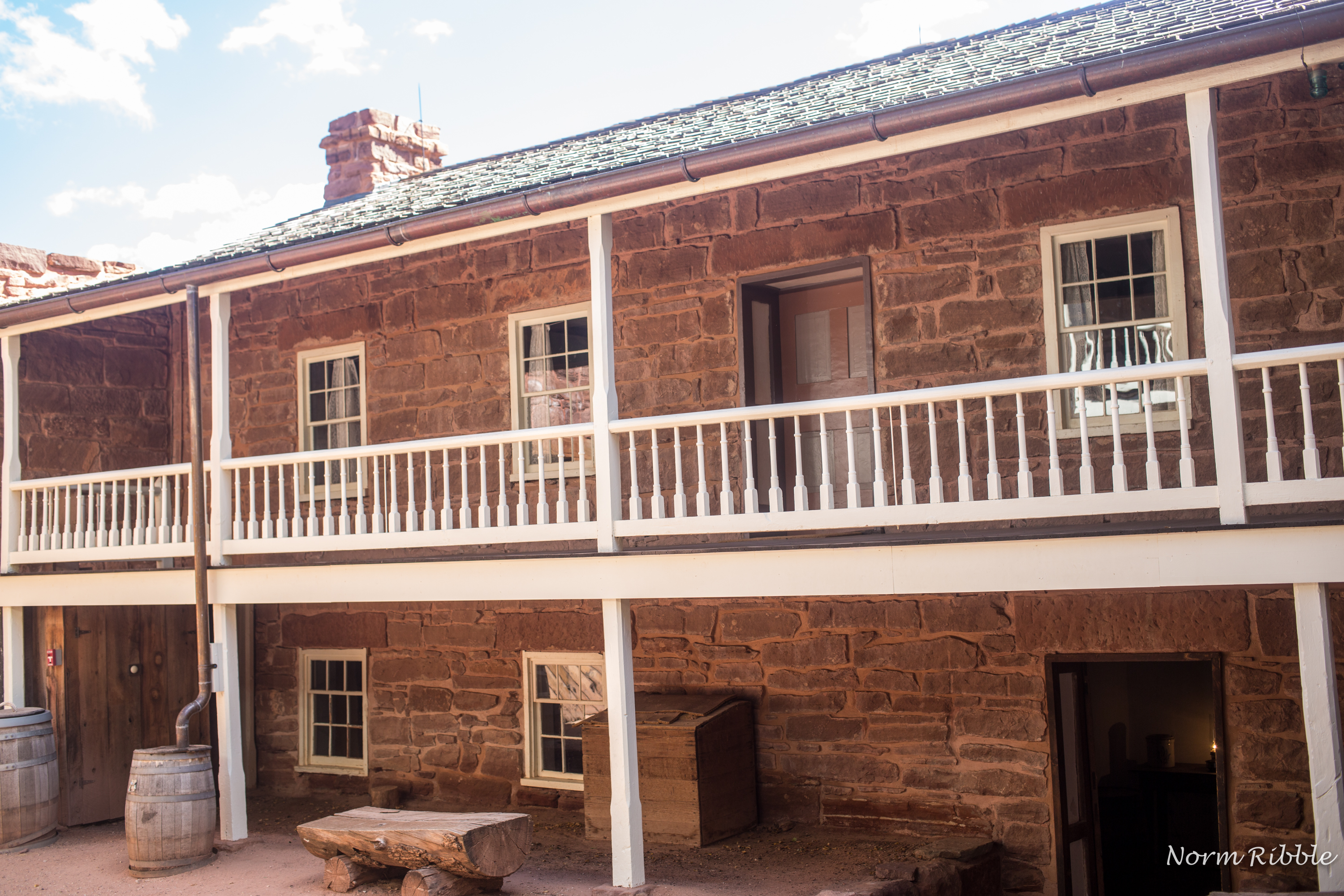 The kitchen is in the Managers quarters, and in the expanded view you'll note the biscuits from the oven. which were baked that morning by our lovely guide. They were wonderfue specially when served with slab of rich butter drect from the cooling room. :)

How about this for a Lazy Susan for pots and pan storage. 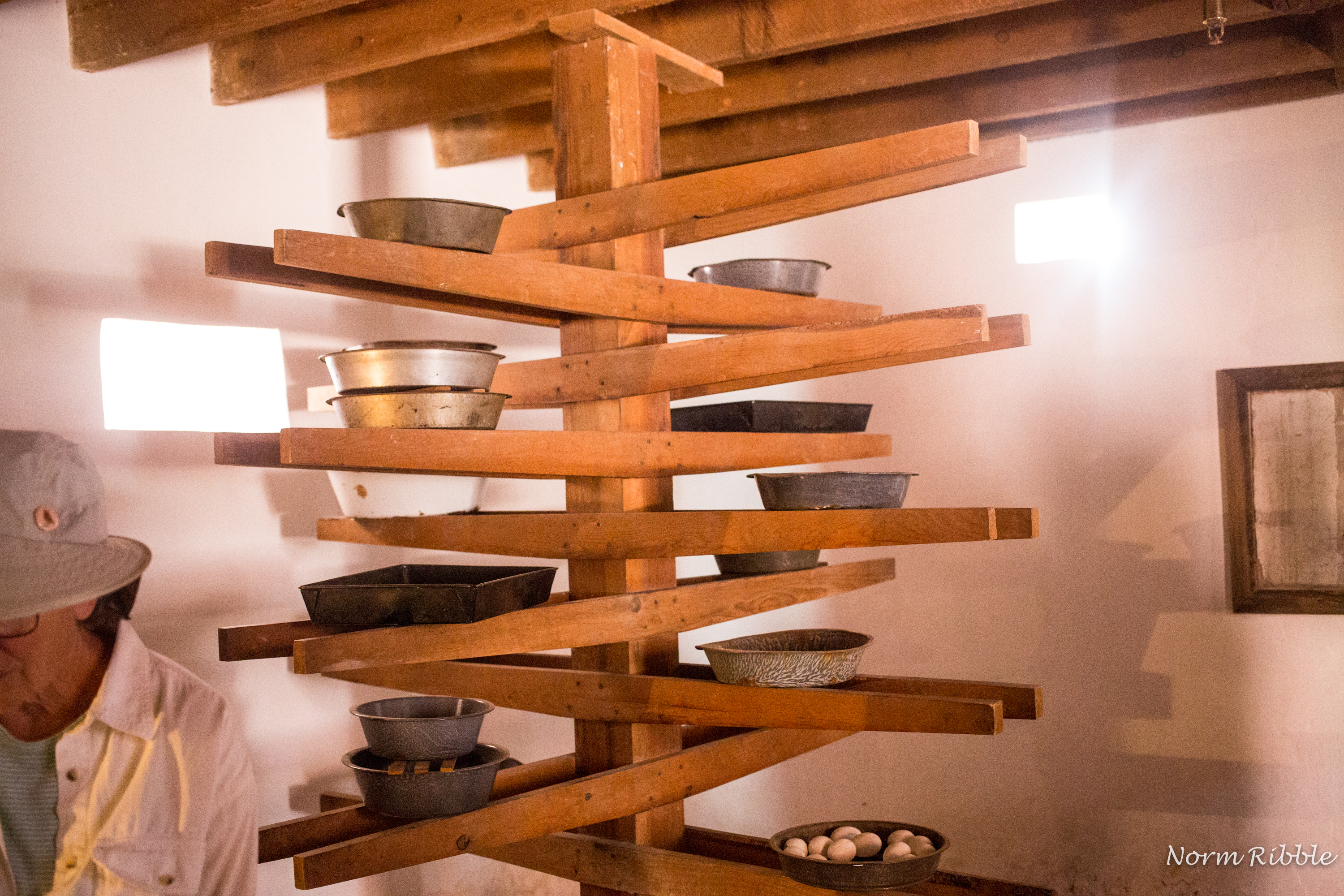 The Cheese Vats. This was a collective operation, and in the 1800's what better way to harvest and ship dairy products than in the form of Cheese. The stream provided the necessary cooling storage area. Also, they didn't have to reinvent the wheel; as they just copied the art of making cheese, which the Cheese Heads had perfected in Wisconsin. 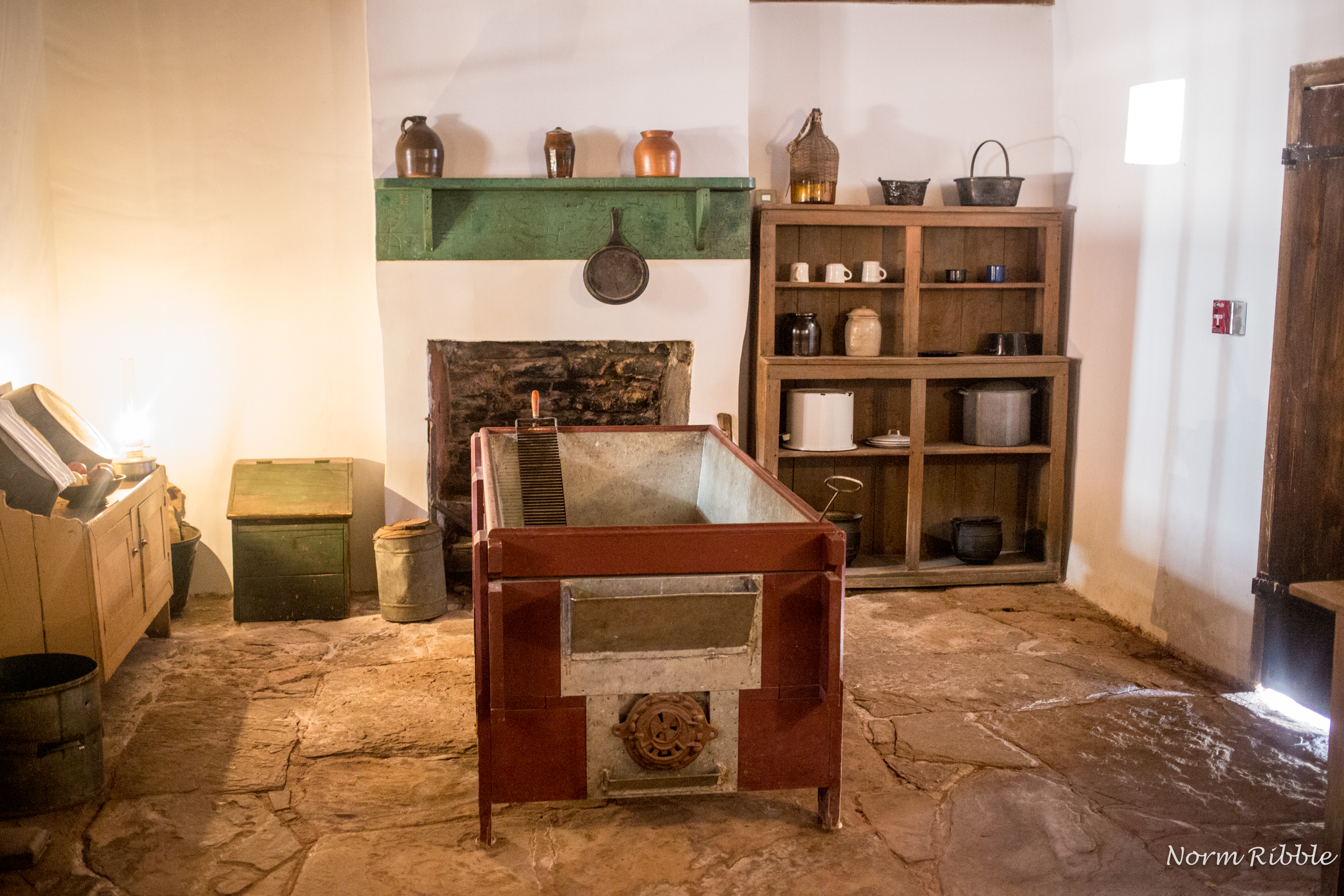 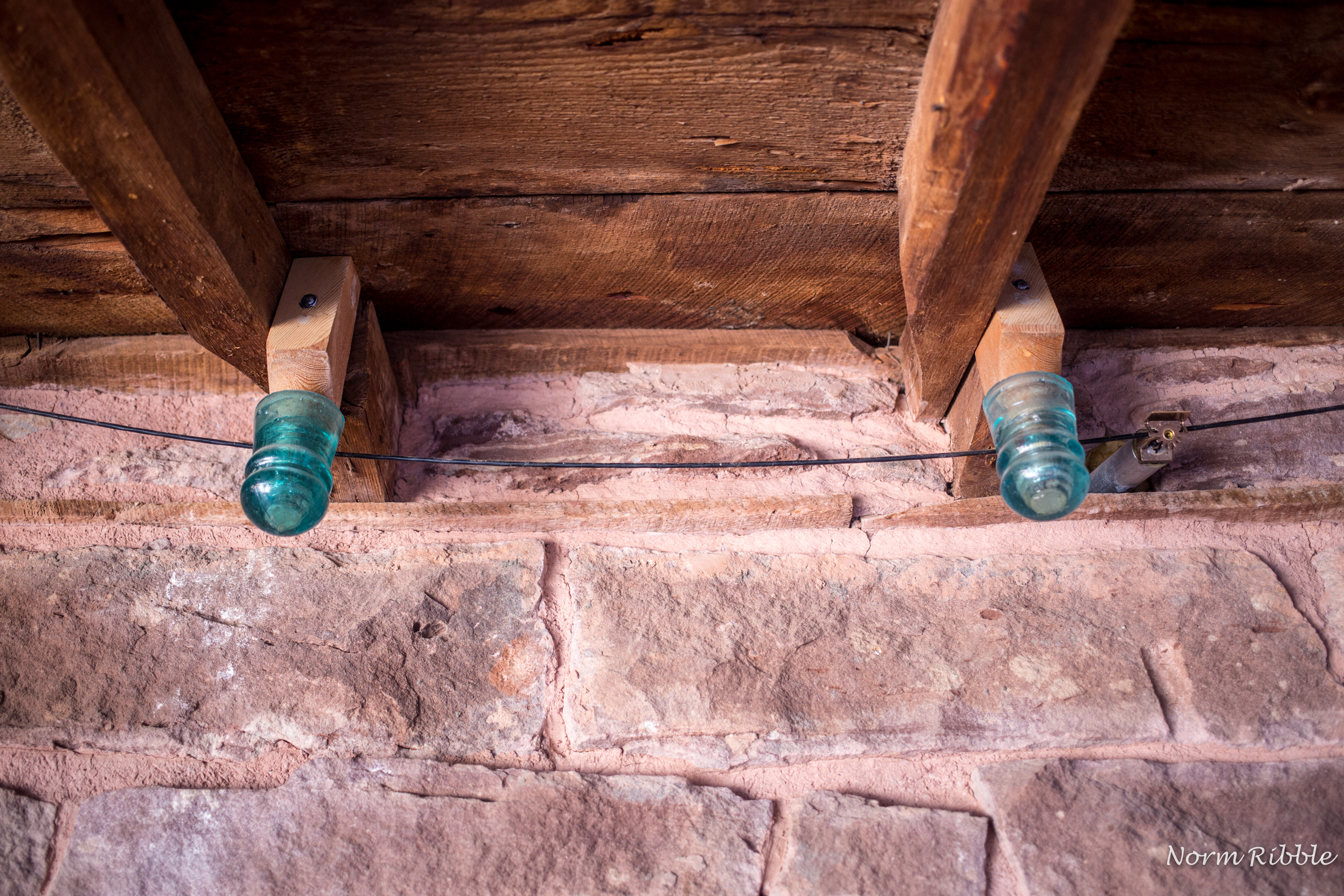 Their communication network was very forward, but the rest of their tools reflected nothing but the hard work that our early pioneers under took in settling this land or ours. 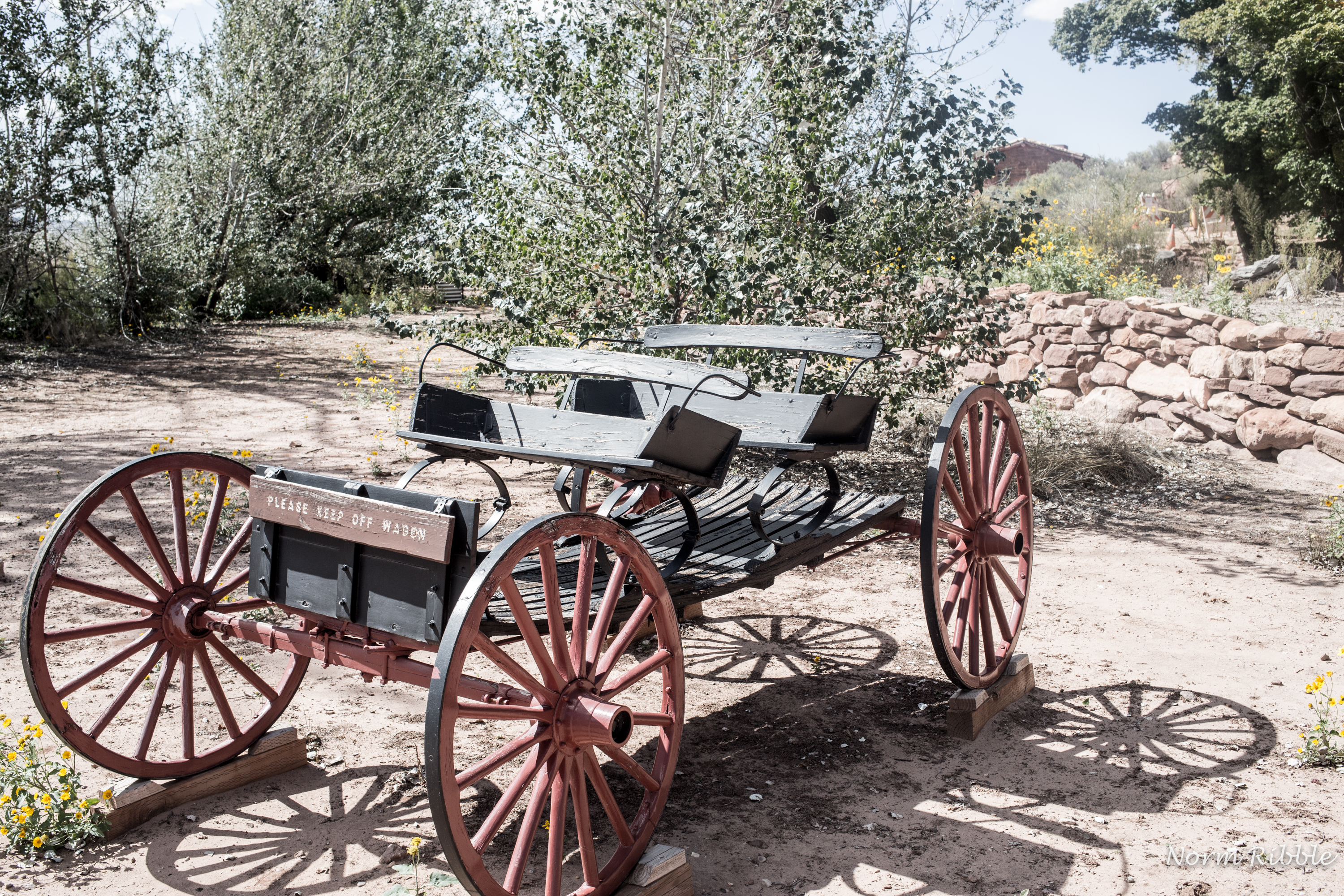 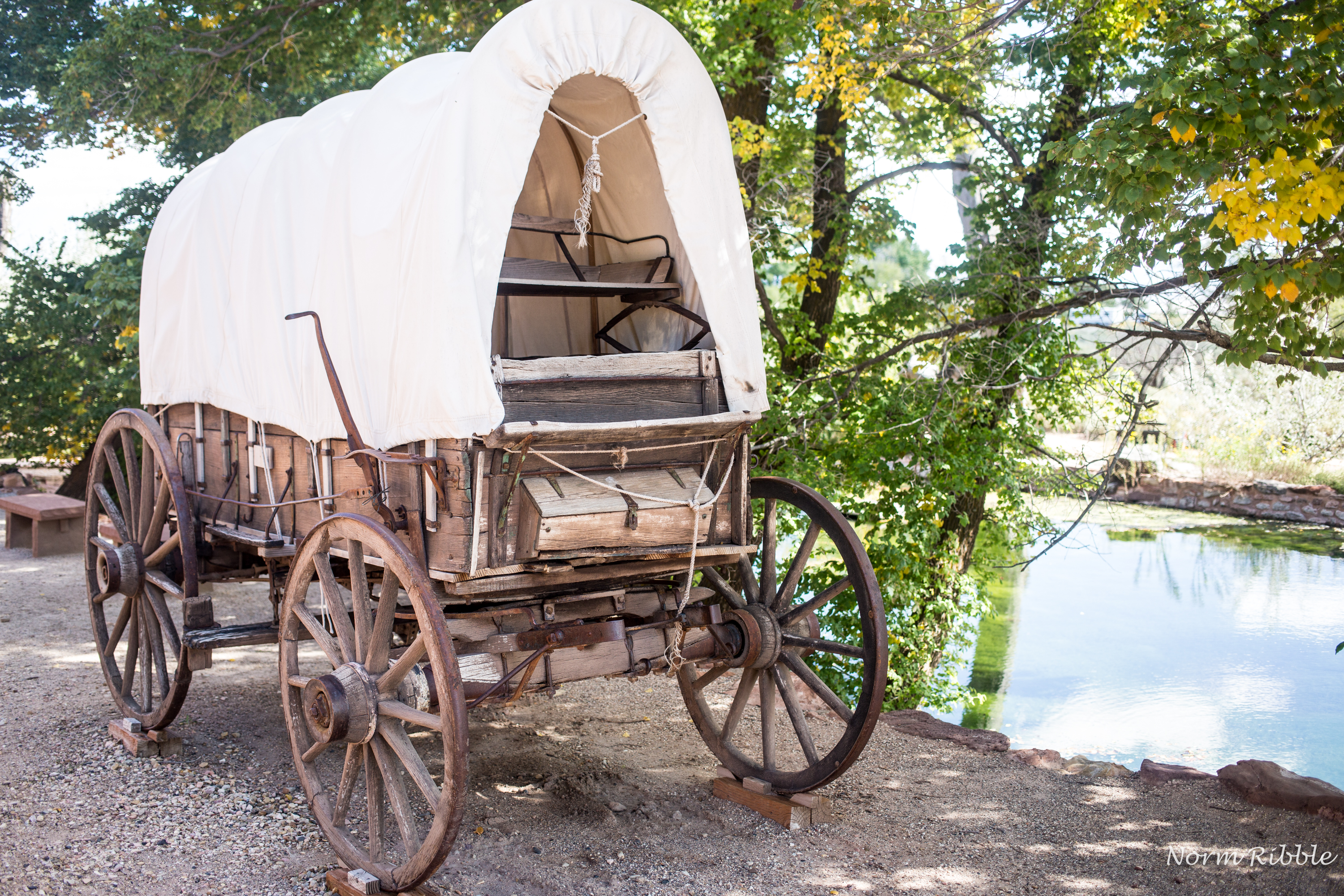 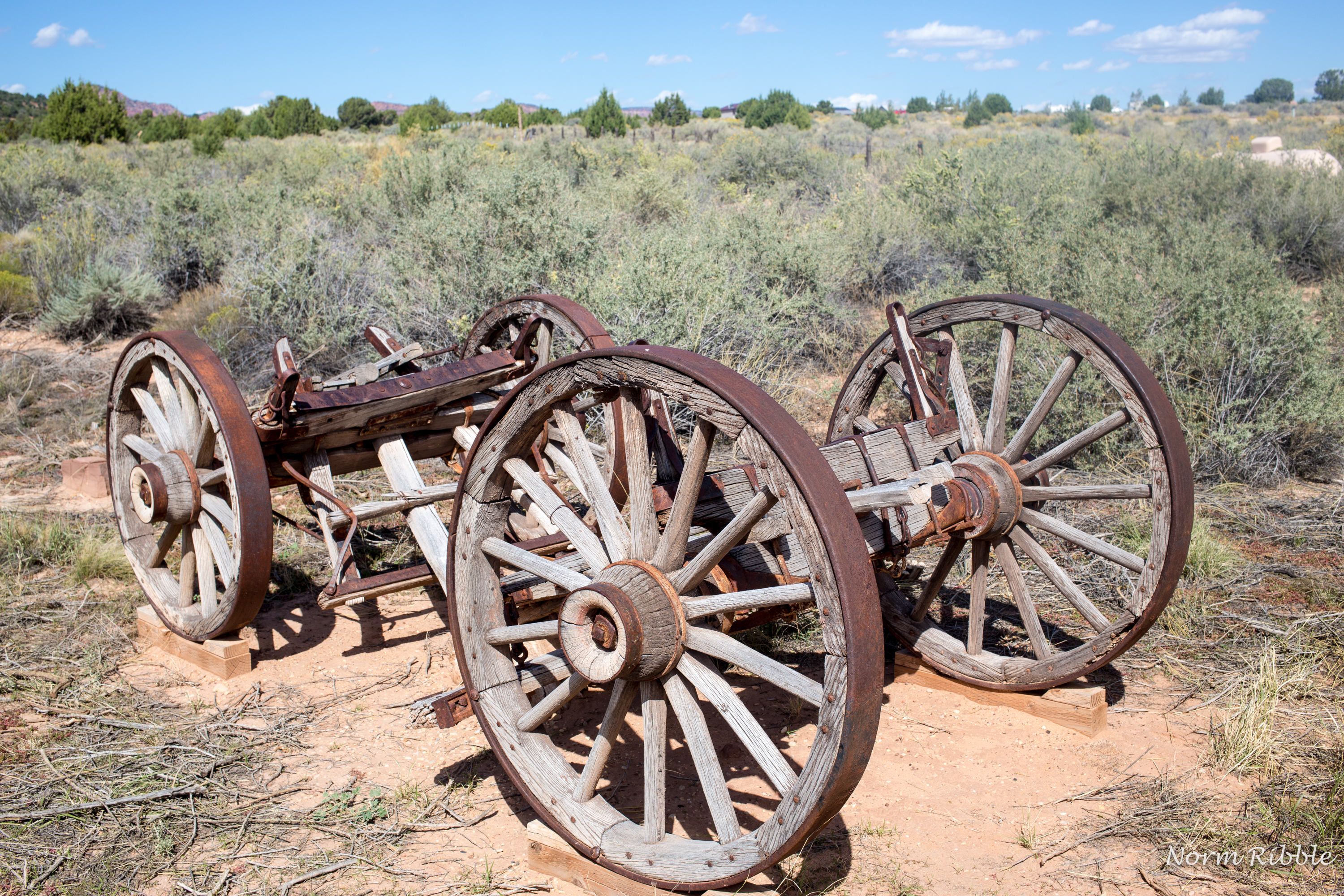 I had a difference to the presentation made by the Park Service Guide, and let me voice this. She seemed critical of the Mormon position of securing the water source by the building of the fort, denying water to others and especially to the traditional Indian Paiute use. In today's environment that would not be acceptable behavior, but in the 1870's the settlement mood was different. The Homestead act had been enacted to attract pioneers to settle the West, to bring this vast territory into productivity and by that action build a Nation. The Mormons may have taken this opportunity a little too far, but who didn't. Remember the Texas, Montana, and New Mexico Range Barons, and the Range Wars mostly fought over water resources.

Too, she presented a case of the over grazing of the grass lands, and how the lands are now sage brush lands and not grass lands. Yes, this was a hard lesson learned by Pioneers across this land of ours from Nebraska, Kansas, Oklahoma and Colorado. The grass that had grown for centuries, we learned could not normally be farmed and harvested year after year. The water supply was not that enduring nor the thin top soil supportive of such activity. Ask any westerner about the Dust Bowl Days, we know them well. We came to a new land, and we made mistakes; but we learned from them. These mistakes were not only about the handling of the land, but of the native people who were here before us; and we learned about water.

Our Guide explained that the Water from Pipe Springs is now divided equally in thirds between the US Government, the Piaute Tribe and the Local residents. She also explained that the percolation rate of the water was know to take 30 plus years, as it make its way through the sandstone crevices. The stream still flows through the Fort; but it is very minimal, as the water table has dropped and is still dropping. I suggested to her that it might be that the three parties were "Over grazing their water supply", but she couldn't understand the connection I was implying. After explaining a second time she remarked, "but we need the water".

Ah, nothing has changed in the last hundred and forty years.

Hey, we're off to Page Arizona, as we once again want to visit Lake Powell, Glen Canyon Dam and especially walk through Antelope Canyon. You'll love this part of the trip, so stay with us.

We happened to cross back into the Stairstep Escalate National Monument about 40 miles out of Page; and these iron laden hills were so colorful, I wanted to share them with you. 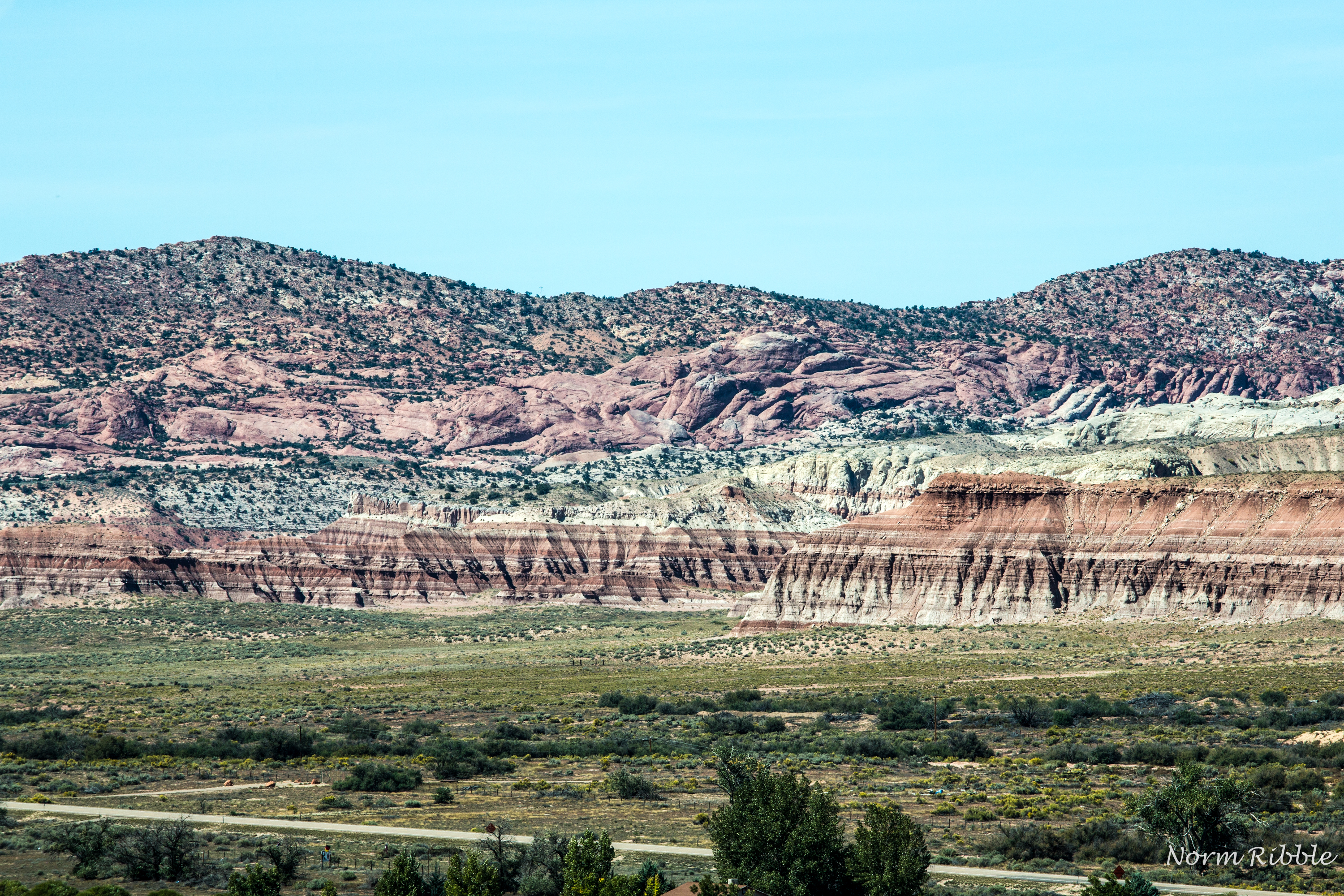 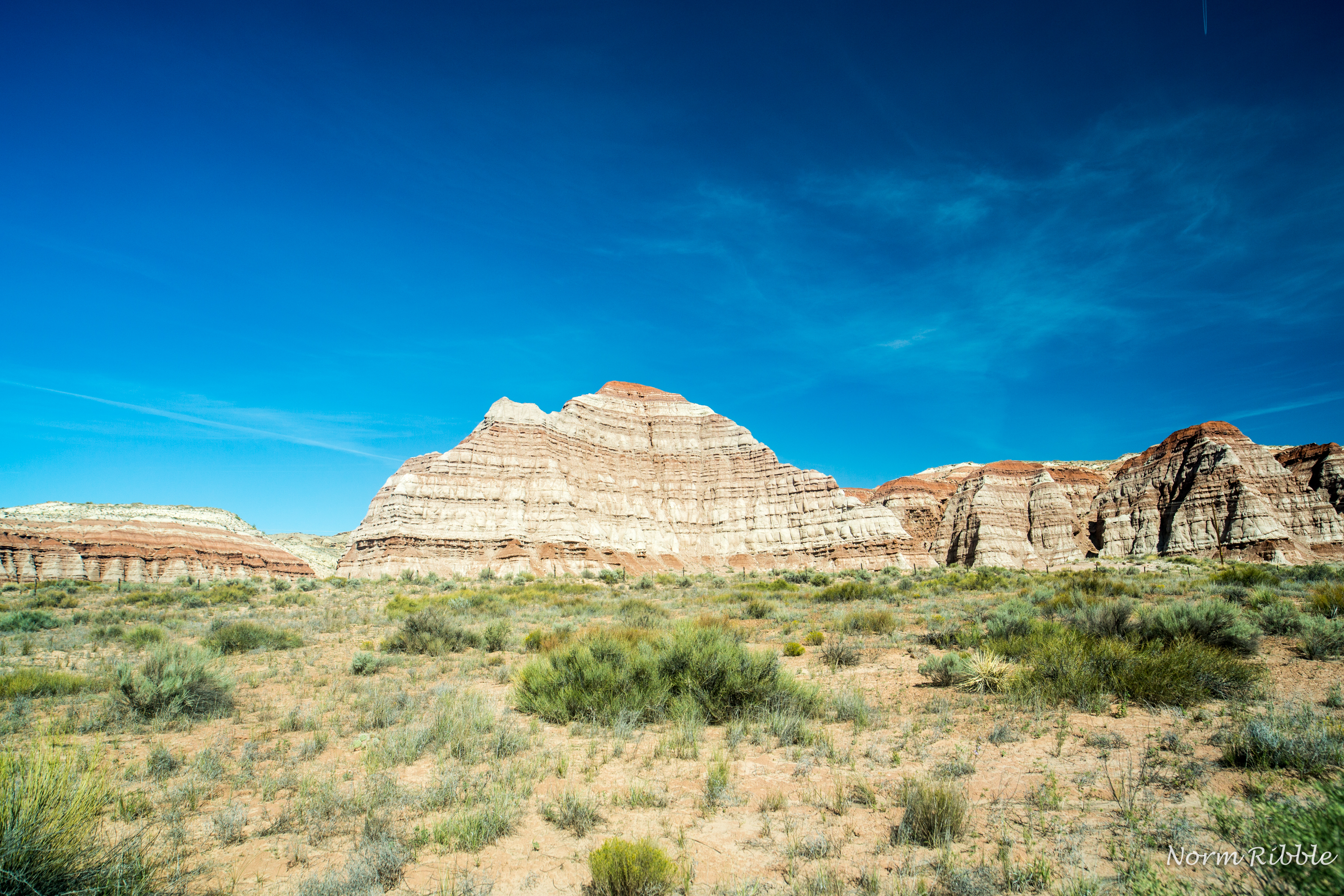 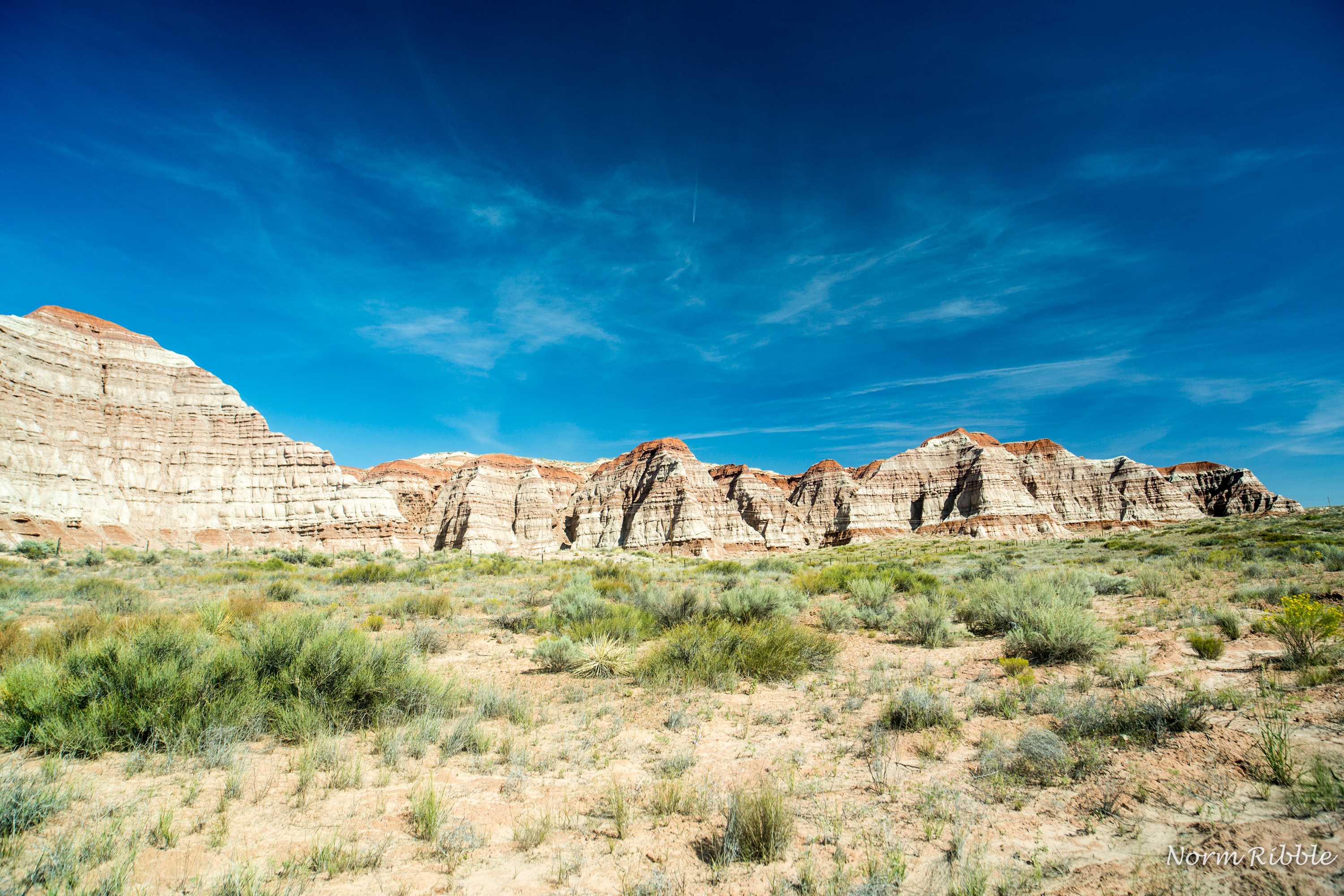 Thank you, the Friends of Utah. We have been enriched by traveling across the majesty of your home land. You have kept it sparkling and pristine. We applaud your steadfastness and your efforts.

Thanks you and we'll be back.

Come on Willie sing us another verse, and we’ll move on down the road.